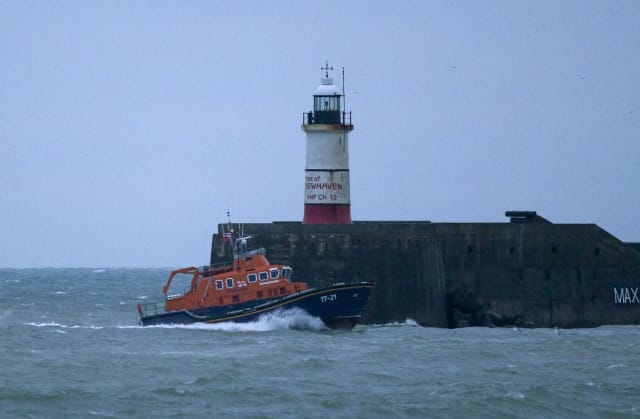 The close-knit community of Newhaven will hold a candle-lit vigil and a two-minute silence for the crew of a fishing boat that sank amid gale force winds on Saturday.

The body of 26-year-old fisherman Adam Harper, from Brixham, Devon, was pulled from the wreck of the Joanna C on Monday night.

Rescuers found the boat’s skipper alive and clinging to a lifebuoy in heavy seas on Saturday.

The tragedy has led to an outpouring of grief for the fishermen and their families, and a two-minute silence is to be held in Newhaven on Wednesday evening.

An emotional vigil will light up the darkness on Wednesday evening, while the lookout tower will be floodlit to respect the lost fishermen.

The tragedy has particularly affected communities in the East Sussex port town and Brixham, where the Joanna C was registered.

The scalloping vessel put out an emergency distress beacon on Saturday at around 6am, and all available resources were scrambled to her aid.

RNLI lifeboats and coastguard helicopters were joined by boats from the local fishing community as they desperately searched the area five miles south of Newhaven.

Rescue teams managed to haul the Joanna C’s skipper from the water after spotting him grasping a lifebuoy.

He indicated that his boat had foundered in the heavy seas and sunk before they were able to launch their life raft and that there were still two crewmen unaccounted for.

Eastbourne lifeboat coxswain Mark Sawyer commended his crew for their courageous efforts, and on behalf of the crew and all the emergency services expressed sympathy for the grieving families.

A GoFundMe page set up to support the families of those affected has so far raised more than £30,800.

Donations will be passed to the Fishermen’s Mission, a charity providing practical, emotional and financial support to fishermen and their families, which will distribute it to those affected.

Organiser Tony Rowe said those involved were “overwhelmed” by the response to the campaign from across the world.

He wrote on the fundraiser: “Our prayers are with those directly involved and the wider community who all have been affected in some way.”

– Visitors can donate to the fundraiser at https://www.gofundme.com/f/rasing-funds-for-those-affected-by-the-joanna-c