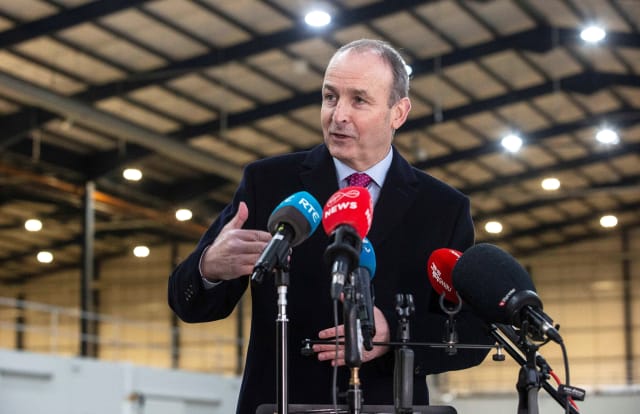 The Irish premier has said the British Government “should and must” hold a public inquiry into the murder of Pat Finucane.

Micheal Martin told the Irish parliament the Finucane family have the “full weight” of the government behind their endeavour to seek justice for Mr Finucane’s killing.

He also said he would be making his position clear to the UK Prime Minister Boris Johnson ahead of the court deadline of November 30 for the British Government to respond to a UK Supreme Court ruling made last year.

Pat Finucane, 39, was shot by loyalist paramilitaries in front of his family in 1989 amid claims of collusion with state security forces.

The Taoiseach met Mr Finucane’s widow Geraldine and son John at Government Buildings in Dublin on Monday and gave them his assurance he would push the British Government for an inquiry to be held.

It was the first time Mr Martin has met the family as Taoiseach.

“I will be engaging with the British Prime Minister on this issue and making it very clear the consistent view of successive Irish governments that there should and must be a public inquiry into the murder of Pat Finucane,” Mr Martin told the Dail.

He said the Government had already reaffirmed its position on the issue to the Northern Ireland Secretary of State through the Minister for Foreign Affairs.

“For more than 30 years, Geraldine and her family have campaigned tirelessly to get to the truth of what happened to Pat,” the Fianna Fail leader said.

“It’s been a very long journey and they have conducted it with great dignity and determination. The Irish government has walked with them on that journey and will continue to do so until the commitments entered into at Weston Park are honoured.”

Mr Martin added: “We will engage with the British Prime Minister and given the extraordinary perseverance of the Finucane family, in my view, it is more than timely for the British Government to respond appropriately in establishing a full public inquiry.”

He also told the Dail that it was important that where a sovereign government entered into agreements, they should be adhered to and followed through.

Mr Martin was responding to Sinn Fein’s Mary Lou McDonald, who said the family should not have to suffer any longer and that only a public inquiry could assist them in getting to the truth.

“The Finucane family have spoken truth to power for 30 years. They haven’t been and they will not be silenced. Their questions deserve answers and their questions will not go away,” she said.

“The British Government has an obligation to ensure that the truth is told.”

Ms McDonald told the Dail she had written to Mr Johnson urging him to “fulfil Britain’s international human rights obligations and hold a public inquiry”.

Speaking after meeting the Taoiseach on Monday, North Belfast MP John Finucane said Mr Martin was “completely unambiguous” in his support for their cause.

“There’s no doubt in our minds that he understands not just the issues in our case, but the significance that it represents, the importance of having an inquiry, of finally dealing with this campaign, which has been going on too long – we’ve been fighting for an inquiry for 31 years,” he said.

Pat Finucane’s widow Geraldine said: “It means a great deal that the Irish government are continuing to strongly back our call for an inquiry.

“He has obviously supported us for a long time, long before he became Taoiseach and I thank him from the bottom of my heart for all he’s about to do. I just hope it pays dividends.”

On Sunday, it emerged that four of Northern Ireland’s political parties have united to call for a public inquiry into the murder of Mr Finucane.

The letter emphasises that establishing the full facts around the killing is a matter of “the utmost public interest” and that “only a public inquiry can now assist the Finucane family to get the truth about the scope and extent of state collusion into Pat’s killing”.