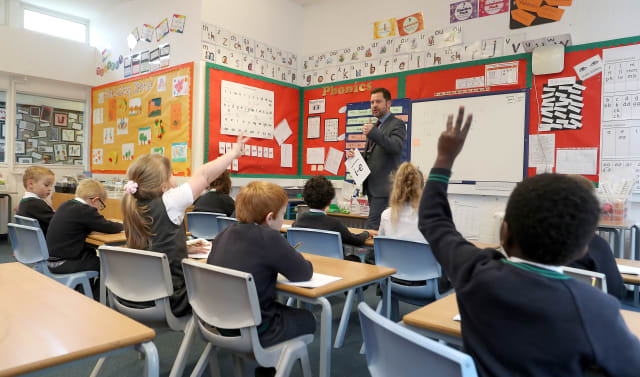 Nearly three in four secondary schools in England had at least one pupil self-isolating at home due to potential contact with coronavirus last week, Government figures show.

Almost a quarter (22%) of secondary school pupils were absent from class on November 19 compared with 17% the week before, the Department for Education (DfE) statistics reveal.

Overall, approximately between 9% to 11% of state school pupils – up to 876,000 children – did not attend school for Covid-19-related reasons on Thursday last week, the analysis shows.

Education unions have called for greater support from the Government to help schools cope, adding that the current situation has “reached a crisis point”.

Around 36% of schools reported they had one or more pupils self-isolating who were told to do so due to potential contact with a Covid-19 case inside the school, up from 29% the week before.

Overall, pupil attendance dropped from 86% a week earlier to 83% on November 19, according to the DfE statistics.

In secondary schools, pupil attendance has fallen from 83% to 78% last week, while attendance in primary schools dropped from 90% to 87%.

The figures come after fears that pupils’ attendance in schools could drop amid the four-week lockdown in England despite schools and colleges remaining open during the national restrictions.

Dr Mary Bousted, joint general secretary of the National Education Union (NEU), said: “This collapse in school attendance is the direct result of the Government’s negligence. They have taken almost no measures to protect schools, pupils and staff from the spread of coronavirus this term.

“Schools and teachers are working incredibly hard to keep the system running without any support or resources from the Government. The situation has reached a crisis point and the Government cannot let coronavirus run riot in schools any longer.”

Geoff Barton, general secretary of the Association of School and College Leaders (ASCL), said: “The reality behind these figures is that many schools are experiencing disruption on a monumental scale and are desperately trying to cling on to the end of term.

“We support the priority of keeping schools open but the government has to give them the flexibility to operate rota systems if it would help to manage this turbulent situation.”

Paul Whiteman, general secretary of the school leaders’ union NAHT, said: “We want to see the minimum amount of disruption to education for children and young people this year. They have already missed out on so much, so keeping schools open is the priority.

“These figures show how hard schools are working to maintain provision for as many pupils as possible, but the support from the Government is not good.”

A DfE spokeswoman said: “It is a national priority to keep education settings open full-time, and that remains equally as important in the weeks up to the end of term as it was when young people returned for the new school year.”

She added: “Everyone must continue to play their part in driving down cases across society, helping keep education open, in light of the damage of closures to children’s education, development and mental health highlighted by the chief medical officer.”