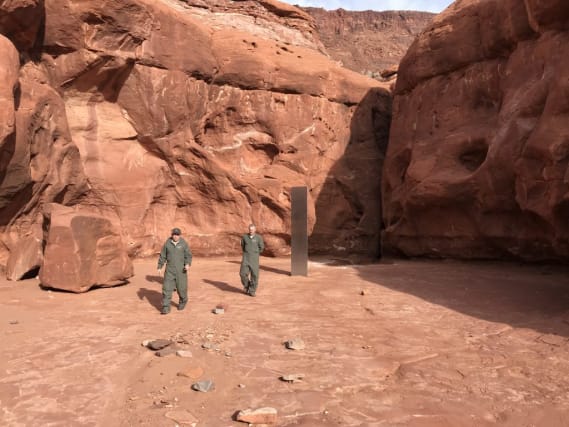 A mysterious metal monolith has been found planted in the ground in a remote part of the United States.

The object was spotted in Utah by state officials who were helping to count sheep from a helicopter.

Pilot Bret Hutchings told local news channel KSL TV: "That's been about the strangest thing that I've come across out there in all my years of flying."

State wildlife officers were on board the Utah Department of Public Safety (DPS) helicopter counting bighorn sheep when the discovery was made on Wednesday.

Mr Hutchings said it was one of the biologists on board who spotted the object and encouraged him to circle back to take a closer look.

What they saw was a metal monolith, which Mr Hutchings estimated to be 10 to 12 feet high, embedded in the red earth.

He said: "We were thinking 'is this something Nasa stuck up there or something? Are they bouncing satellites off it or something?'"

Mr Hutchings said his best guess was that it had been put there by a "new wave artist" or a fan of 2001: A Space Odyssey.

In the 1968 Stanley Kubrick movie, a metal monolith is discovered in the desert by apes.

After the DPS shared images of the structure on its social media channels, followers came up with their own theories.

One suggested it might be a prop for a TV show, another joked it was the off switch for the planet, while a third claimed to have planted it there himself "hoping it would freak someone out one day".

The DPS said in a statement the exact location of the monolith was not being revealed for public safety reasons.

It added that installing structures without permission on federally managed public lands is illegal.