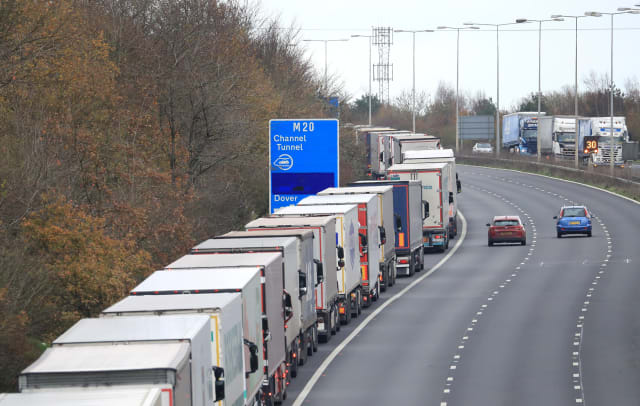 Lorry drivers were left queuing along the M20 in Kent as Brexit border control tests were carried out at the Channel Tunnel.

Highways England said it had closed the entry and exit sliproads at Junction 11 on Tuesday due to the number of HGVs parked on the hard shoulder.

It is understood the delays were caused by French authorities conducting tests on border checking procedures at the Eurotunnel terminal in Folkstone.

A spokesman for Getlink, which operates the Channel Tunnel, said: "The backlog (of traffic) built up this morning during tests conducted by the authorities in preparation for Brexit."

The spokesman said on Tuesday afternoon that traffic was now flowing "smoothly" through the terminal and services were operating as normal.

It is understood that further intermittent border tests will be carried out before the Brexit transition period comes to an end on December 31.

Photographs showed dozens of freight lorries queued along the M20.

Highways England tweeted: "M20 coastbound at J11 Westenhanger – the entry slip is now closed due to heavy congestion in the area due to delays at Eurotunnel.

"Due to the heavy congestion with HGV's at this location, for safety reasons we have also closed the exit slip at J11 Westenhanger due to the amount of lorry's parking up along the hard shoulder all the way back to exit slip."

The Channel Tunnel connects Folkestone to Coquelles near Calais in France.