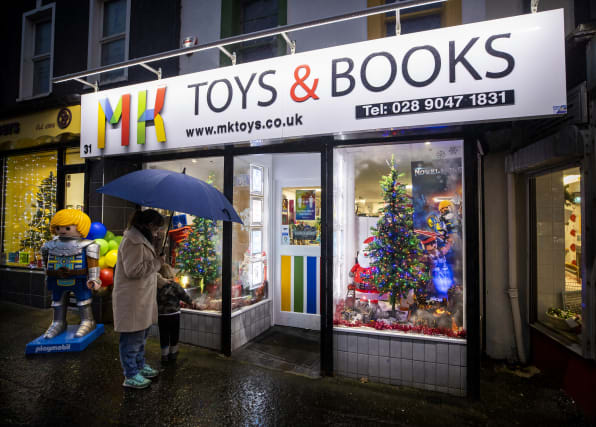 Every adult in Northern Ireland could receive a prepaid card from Stormont worth £75-£100 to spend locally to bolster the Covid-19 recovery.

The £95 million windfall will be used in shops, restaurants and hotels at the start of 2021 under Economy Department plans to breathe life back into thousands of struggling businesses.

Retail and hospitality closes for two weeks from Friday to prevent a second spike in the pandemic from overwhelming the health system, but click and collect retail will still be allowed.

The post-festive period is traditionally the most difficult for firms and will be straitened this time by effects of the pandemic and serious disruption to the Christmas trade which is a lifeline for many.

Click and collect will be permitted to operate on an appointment-only basis from November 27 once non-essential shops close.

He said he was less concerned about queues outside shops than large numbers inside.

Eligible businesses will still be able to access financial support schemes during this period.

Stormont’s ministerial Executive has also agreed that places of worship may open for individual acts of worship, and that drive-in services will be permitted for the two-week period.

First Minister Arlene Foster said: “The Executive is taking a balanced approach to implementing the circuit-breaker restrictions which begin on Friday so that people can plan and prepare for Christmas in a safe and controlled way.

“Strict arrangements will be in place to limit contact with others.”

“This is good news for many struggling retailers who face a difficult two-week circuit-breaker and for consumers who are able to continue their Christmas shopping with more choice.”

Church leaders across Northern Ireland had asked for permission to keep places of worship open for individual prayer.

Mrs Foster said: “This weekend sees the beginning of Advent and we have agreed that it is important that all places of worship can remain open for individual prayer.”

Another 79 people have tested positive for Covid-19 in Northern Ireland with a further 11 deaths recorded, the Department of Health said.