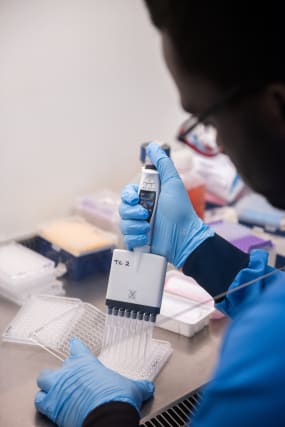 Using a half dose of the Oxford Covid vaccine before delivering a full dose could “prime” the body to create a better immune response, scientists have said.

One of the dosing patterns used by the scientists, and tested on about a third of those in the study, suggested 90% effectiveness if one half dose is given followed by a further full dose.

Experts behind the study believe that a smaller initial dose may prime the immune system to give a bigger, better response when it meets coronavirus.

Using this dose regimen for the vaccine could also mean that manufacturer AstraZeneca could double the initial doses of vaccine.

The pharmaceutical company said that putting half doses into vials “doesn’t inject incredible amount of complexity to our supply chain”.

When asked about the different dosing patterns assessed in the clinical trial, Professor Andrew Pollard, director of the Oxford Vaccine Group, told reporters: “We think that by giving a smaller first dose that we’re priming the immune system differently – we’re setting it up better to respond.

“And what we don’t know at this moment is whether that difference is in the quality, or the quantity of the immune response.

“And that’s something we’re going to be digging into over the next weeks and we’ve already started some work this morning to try to answer some of those questions.”

Sarah Gilbert, professor of vaccinology at the University of Oxford, added: “What we’ve always tried to do with the vaccine is fool the immune system into thinking that there’s a dangerous infection there that it needs to respond to but doing it in a very safe way.

“And it could be that by giving a small amount of the vaccine to start with and following up with a big amount that’s a better way of kicking the immune system into action and giving us the strongest immune response, and the most effective immune response, but more work to do on that.”

Prof Pollard added: “It is absolutely true if you give a single dose, with almost all vaccines, the higher the dose you give the better the immune response, but we’re not giving a single dose here, we’re priming the immune system with the first dose.

“And then the second dose is boosting it.

“And the different ways in which you prime are known to influence the response to the booster. So it’s not a total surprise to find this, and the best evidence that we have that priming has an impact on the boost is from babies who are naive to these different germs.

“When we use vaccines in babies, if you use different doses for priming, you can get a better or a worse boost. So I think it’s not totally unexpected, but there could be a difference depending on what you do with priming.”

AstraZeneca chief executive Pascal Soriot said the most effective regimen dose is “good news” because it means more people could be vaccinated faster.

“Being able to vaccinate more people faster is a really big plus,” he told a Science Media Centre briefing.

Pam Cheng, executive vice president of operations and information technology at the pharmaceutical giant, added: “[With] the half dose treatment, we would actually have double amount of supply for the first, for the initial dose, which is great news.

“We are prepared to be able to supply in either half dose or full dose. It actually doesn’t inject incredible amount of complexity to our supply chain.

“It’s quite simple, so we can keep the current 10 dose vial with less fill, or we would explore additional doses per vial so we’ve got options on at this point in time to do both.

“And it wouldn’t inject complexity that would have any kind of meaningful delay or disruption.”

Meanwhile Mene Pangalos, executive vice president for biopharmaceuticals R&D at AstraZeneca, said the company is “very much” engaging with regulators.

He said the subgroup analysis – which showed 90% efficacy for a particular dose regimen – was enough to file for regulatory approval.

In response to a question from the PA news agency, Mr Pangalos said: “Obviously the discussions with the regulators need to be around, ultimately will be, which dose regimen, or both regimens, get approved.

“But the pooled analysis is sufficient for the approval, we think, across a variety of regions including the EU and the UK.”

He added: “We’re very much now engaging with regulators and we now have a lot of work to do to continue to understand the data and get ready for regulatory submissions.

“Our job now is to work as rapidly as possible with regulators around the world to see this vaccine approved and hopefully implemented in terms of its use.”

He continued: “We already have rolling submissions ongoing with both the EMA (European Medicines Agency) and the MHRA (Medicines and Healthcare products Regulatory Agency) in terms of the submission.

“Of course, as we now finalise the data package, the efficacy and safety data will also be submitted as part of that rolling submission.

“So, the submission has already started.”

Earlier this month Health Secretary Matt Hancock said that a vaccine could be approved for use within days of a licence application being submitted due to rolling analysis of the data.