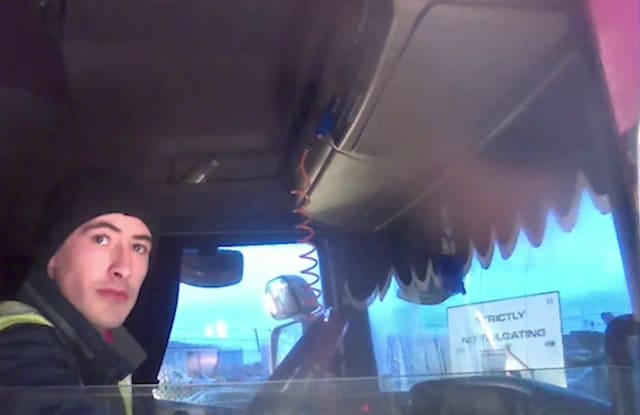 A lorry driver accused of being a member of a people-smuggling ring linked to the deaths of 39 migrants has told jurors he only agreed to move cigarettes “for a bit of extra cash”.

Christopher Kennedy, 24, of Keady, County Armagh, allegedly picked up two trailer-loads of people from Purfleet in Essex after they were transported from Zeebrugge in Belgium on October 11 and 18 last year.

On October 23 last year, another driver, Maurice Robinson, collected a trailer and discovered 39 Vietnamese people had suffocated on the same route.

Giving evidence in his Old Bailey trial, Kennedy told how his boss Caolan Gormley, who he knew from County Armagh, asked him to lift cigarettes.

He denied knowing that a trailer he took to be uploaded in Orsett, Essex, on October 11 last year contained people.

Kennedy said he grew up on a farm, the oldest of four siblings, and became an HGV driver at the age of 19, despite three driving-related offences, dating back to the age of 13.

He was handed an eight-month ban after he was stopped on May 3 2018 driving a lorry with the wrong number plate in Belfast.

In early October last year, the defendant said Mr Gormley told him to get a cheap phone “for picking up a load of cigarettes”.

Kennedy said: “He was talking to me on the phone asking would I be interested in a bit of extra cash.

“I asked him what doing and he said just lifting cigarettes. Obviously I agreed to do it for a bit of extra cash.”

James Scobie QC, defending, asked: “Were you ever paid for any illegal load?”

The lawyer said: “Did he tell you where these loads were coming from?”

The defendant said: “No, he didn’t say.

“I thought they were just evading duty, being smuggled in.”

On October 11 last year, Kennedy said Mr Gormley told him to go to Orsett after he picked up the trailer in Purfleet using codes he was given.

Mr Scobie said: “Did you know what was to happen when you get there?”

Kennedy said: “No. I was told go there and stop and wait and that was it.”

He added that he was instructed to wait in his cab and someone would come and unload.

“I was told not to look in the trailer. Just cigarettes and that was it,” he said.

Jurors were shown CCTV footage of Kennedy’s lorry coming and going from Orsett, along with a number of vehicles.

Mr Scobie said: “We now know there was a number of people got into those vehicles. Did you see that at any stage?”

The defendant said the name of haulier boss Ronan Hughes only came up on October 11.

Mr Scobie asked: “What did you understand was his role in these illegal goings on?”

Kennedy said: “It was his trailer, his load.”

Kennedy, Eamonn Harrison, 23, of Co Down, and Valentin Calota, 37, of Birmingham, have denied being involved in a people-smuggling plot.

Harrison, and Gheorghe Nica, 43, of Basildon, Essex, deny 39 counts of manslaughter, which Hughes, 41, of Co Armagh, and Robinson, 26, of Craigavon in Northern Ireland, have admitted.

The court has heard Mr Gormley was arrested but is not a defendant in the case.