Falklands hero’s medals to be sold at auction 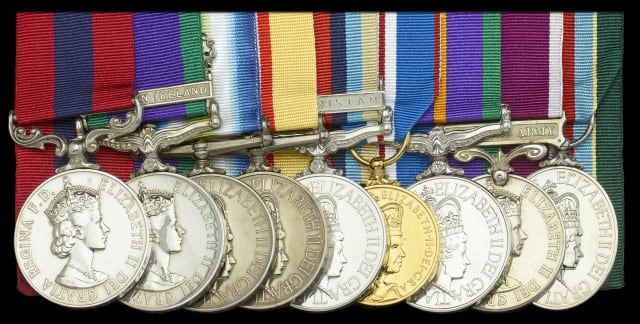 The medals belonging to a Falklands war hero are expected to sell for £120,000 when they are sold at auction.

Sergeant John Meredith, who served with the Parachute Regiment, showed “outstanding gallantry and leadership” in saving five colleagues during the Battle of Goose Green, for which he was awarded the Distinguished Conduct Medal.

His citation read: “He was a dedicated and devoted leader, encouraging and steadying the younger soldiers under fire and inspiring the platoon by his personal example.

“There is no doubt that these five men owe their lives to Sergeant Meredith’s prompt and gallant action.”

Major Philip Neame’s account of the action at Goose Green was published in the book Above All Courage, and he describes Mr Meredith as “hard as nails”.

“Meredith, of course, held it all together and made sure the platoon continued to work together – a really solid number, hard as nails and with the ability to think,” he said.

“He never appeared fussed, which is what I think really helped at this time, at least for his blokes.”

After 23 years’ service Mr Meredith left the full-time military and the following year joined the Territorial Army, completing tours in Iraq and Afghanistan.

In 2010, after a career of service spanning six decades, Mr Meredith, from Bangor, North Wales, retired aged 60 as a major.

Now aged 70, he is selling his nine awards with citations and letters, including from the Prince of Wales.

They are expected to fetch £120,000 at auctioneers Dix Noonan Webb on December 3.

Christopher Mellor-Hill, from Dix, Noonan, Webb, said: “We are very pleased to be offering this group on behalf of Major Meredith, who played a vital part in the action at Goose Green – a pivotal event in the Falklands War.

“Only eight Distinguished Conduct Medals were awarded during the South Atlantic Conflict.”