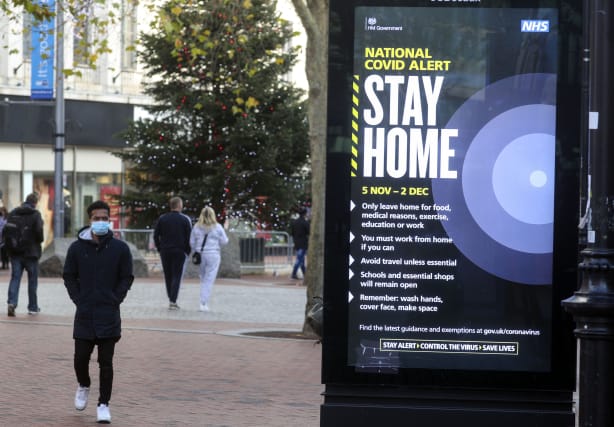 Covid-19 case rates have started to fall in most local areas across England, latest figures show.

In only two of the nine regions are a majority of areas recording a week-on-week rise: London and south-east England.

It is still too soon to judge the full impact on case rates of the England-wide lockdown, however.

The nationwide restrictions began on November 5, and the most recent figures are for the week ending November 18 – just 14 days into the lockdown.

Given it can take up to two weeks for Covid-19 symptoms to appear, and further time for somebody to be tested and the result to be processed, more data is needed to be certain about how and where case rates are falling.

But the latest figures suggest the numbers are heading in the right direction, though crucially not in all parts of England.

Health Secretary Matt Hancock said: “I am very glad to see in the data that the number of cases across the UK is clearly starting to fall. That is good news.”

Here is an overview of the latest case rates in each region, including the areas with the highest and lowest numbers.

In all instances, the figures are for the week ending November 18 and have been calculated by the PA news agency using data published by Public Health England.

This is the region that now has the highest rates in England.

Thanet also appears in England’s top five rates, where the number is currently 515.1, up from 460.8.

The rate is rising in 34 out of 67 local authority areas in south-east England.

The biggest week-on-week fall has been recorded in Oxford, where the rate has dropped from 256.5 to 152.8.

– Yorkshire and the Humber

Rates are falling in almost every area of Yorkshire and the Humber – a turnaround from last week, when most areas were recording a rise.

In the latest figures, just three out of 21 areas showed an increase: Craven, North Lincolnshire and Selby.

North Lincolnshire recorded the biggest week-on-week jump in rates – but this was only a small rise, from 412.1 to 448.1.

Hull continues to have the highest rate in the region, and the second highest in the whole of England: 615.1, down from 785.3.

Rates are up in only three of the 39 areas in north-west England: Carlisle, Hyndburn and South Lakeland.

This is also the highest rate in the region.

Oldham, which once had the highest rate in England, is down from 641.1 to 442.0 – the biggest week-on-week drop in the North West.

Liverpool continues to see a big drop in rates. Its seven-day rate as of November 18 is 205.2, down from 662.2 when it entered Tier 3 of the Government’s restrictions on October 14.

Every one of the 12 local authority areas in north-east England recorded a fall in rates in the latest figures.

Case rates are up in only three of the 40 local authority areas in the East Midlands, all in the south of the region: Harborough, South Northamptonshire and Wellingborough.

But rates are still very high in some parts of the East Midlands.

East Lindsey is the highest in the region, where the rate is currently 515.8, down very slightly from 517.9.

This is also the third highest rate in the whole of England.

Rutland continues to record the lowest rate in the East Midlands, which is now down from 142.8 to 122.7.

Just five of the 30 local authority areas in the West Midlands recorded a rise in the latest figures: East Staffordshire, Herefordshire, Newcastle-under-Lyme, Nuneaton and Bedworth, and Wolverhampton.

Rates are still high in some areas of the region, however.

Malvern Hills continues to record the lowest rate: 111.8, down very slightly from 115.6.

Along with south-east England, London is one of only two regions where a majority of areas have recorded a rise in the latest figures.

Havering also has the highest rate in London.

The neighbouring borough of Islington has seen the biggest week-on-week drop, down from 179.0 to 145.2.

Bristol continues to have the highest rate in south-west England, but the rate has fallen, down from 485.6 to 434.4.

A total of 20 of the 29 local authority areas in the region are now recording a drop.

Seven of the 10 lowest rates in England are in Eastern England, including the lowest of them all: Mid Suffolk, where the rate has fallen from 76.0 to 56.8.

A total of 27 of the 45 local authority areas recorded a fall in the latest figures.