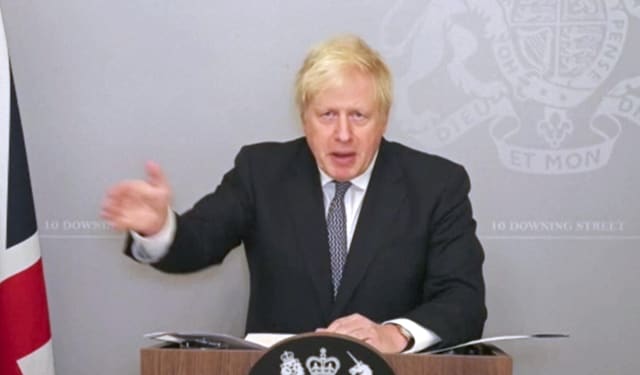 Britain will face months more under coronavirus restrictions despite promising steps towards a vaccine, Boris Johnson has warned, as he told people that Christmas will be the season to be “jolly careful”.

The Prime Minister said the country was “not out of the woods yet” and stressed that it would take a while before people can be inoculated, as the Oxford-AstraZeneca team said its jab had proved 70% effective.

It follows positive results from Pfizer and Moderna but none of the jabs have yet been approved for use and getting people vaccinated will be a major undertaking.

The Prime Minister said: “We can hear the drumming hooves of the cavalry coming over the brow of the hill but they are not here yet.

Mr Johnson warned that “this is not the moment to let the virus rip for the sake of Christmas parties”.

He said that “things will look and feel very different” after Easter with a vaccine and mass testing.

But he stressed the months ahead “will be hard, they will be cold, they include January and February when the NHS is under its greatest pressure”.

Under the new system:

– In Tier 2, alcohol may only be served in hospitality settings as part of a substantial meal.

– In Tier 3, pubs and restaurants will only be able to offer takeaway and delivery services, while indoor entertainment, hotels and other accommodation will close.

The 10pm curfew will be relaxed, with last orders now closed at that time and premises ordered to shut at 11pm.

Details of which areas will be in which tiers will be set out on Thursday.