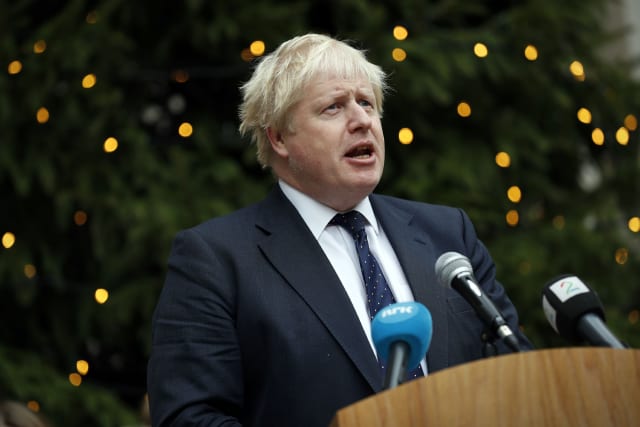 Families have been warned to be “jolly careful” over Christmas by the Prime Minister.

Addressing a Downing Street press briefing, Mr Johnson said that it was hoped that people could see “a little more” of their family and friends over the festive period.

Mr Johnson said: “This is not the moment to let the virus rip for the sake of Christmas parties.

He added: “We don’t want to ruin it by overdoing it”.

He said the plan would be published later this week and there were “very good discussions” ongoing.

“We want to make sure we have a solution for Christmas that everybody can share understand and respect throughout the whole of the UK,” he said.

The plans are not likely to involve closing schools a week early to allow families to isolate for a week before seeing elderly and vulnerable relatives over the holidays, the Prime Minister said.

Keeping children in school has “been at the heart” of efforts of the last few months, he said, adding: “It has meant that we have had to put a lot of pressure sadly on other sectors in order to drive down transmission but we believe education is of huge importance and we want to keep kids in school as much as we can.”

Professor Chris Whitty, chief medical officer for England, urged caution “before during and after” Christmas to minimise the impact of the restrictions being loosened for the holiday.

“It is pretty obvious to anybody that the Christmas holiday period – the loosening around that which I think everyone welcomes as an ability for families to come together and all the things that go on with the winter period – we all know that is going to come at a risk,” he said.

“And the amount of risk of it depends on three things – people stick to the Tiers before we go into Christmas to make sure we keep the numbers coming down or stabilised at a low level.

“That people over Christmas take the opportunities but take them incredibly responsibly.

“And then coming out of the Christmas period, again, people take this next period to spring incredibly seriously.”

Prof Whitty continued: “If people do all those things very seriously. We will have much less impact on Christmas whilst people still being able to enjoy it.

“If everyone is serious before during and after, then we can minimise the amount of impact we’ll have – of course we will have an impact and that’s accepted.

“This is all part of the balance of having to keep the virus under control. But trying to do so in a way that is the least socially and economically damaging.

“It is a very difficult balance. As we all know, for which there is no perfect answer it’s trying to get the balance as best we can between these competing difficulties.”

Earlier in the Commons, the Prime Minister told families to make a “careful judgment” about visiting elderly relatives.

Mr Johnson said the virus “is obviously not going to grant a Christmas truce” and warned that if festive revellers “blow it with a big blowout Christmas”, the country will pay for it with tougher restrictions in the new year.

He told MPs: “We all want some kind of Christmas, we need it, we certainly feel we deserve it. But what we don’t want is to throw caution to the winds and allow the virus to flare up again, forcing us all back into lockdown in January.

“So to allow families to come together, while minimising the risk, we’re working with the devolved administrations on a special time-limited Christmas dispensation, embracing the whole of the United Kingdom.”

He added: “I love Christmas, I love a big get-together.

“I think the trouble is that the people of this country can see that there is a real risk that if we blow it at Christmas with a big blowout Christmas, then we’ll pay for it in the new year, and they want a cautious and balanced approach and that’s what we will deliver for the whole UK.”

Mr Johnson added the Government will be publishing guidance for people classed as “clinically extremely vulnerable” on how to manage the risks in each tier as well as over Christmas.

The Government’s Covid-19 Winter Plan states the virus “continues to pose a very real threat to the UK” but nurseries, schools and colleges will remain open until the usual end of term.

It also notes that since “Christmas will likely lead to an increase in transmission” it will be particularly important to be cautious early in the new year when NHS services are typically under the most pressure – with more than 95% of hospital beds usually occupied in some trusts.

Scotland’s First Minister Nicola Sturgeon also said on Monday that planned easing of coronavirus restrictions over Christmas will be “slight and careful”, but household mixing is “likely” to be allowed.

Ms Sturgeon said: “We’re trying as hard as we can to reach a sensible balance, although it is possible – likely, in fact – that some households may be able to form slightly larger bubbles with each other for a short period over Christmas.

“We’re considering this because we recognise that isolation and loneliness can hit people particularly hard over the Christmas period.”

Welsh Health Minister Vaughan Gething said as part of the festive relaxation, leaders are also considering “a common arrangement for travel across the UK”, and called for people to consider taking a “complete break” from seeing others before commuting home for Christmas.