William and Kate’s heartache after death of their dog Lupo 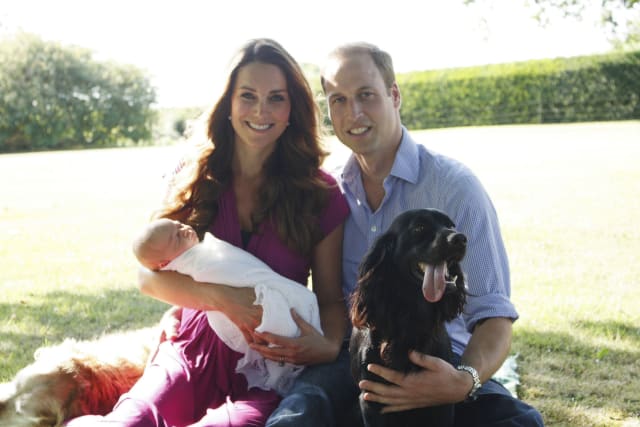 The Duke and Duchess of Cambridge have revealed that their beloved dog Lupo has passed away.

The nine-year-old black cocker spaniel was a wedding present from Kate's brother James.

"He has been at the heart of our family for the past nine years and we will miss him so much."

Following the birth of Prince George in July 2013, William said Lupo had coped very well with the upheaval in the house.

"As a lot of people know who have got dogs and bring a newborn back, they take a little bit of time to adapt, but, no he's been all right so far."

He added: "He's been slobbering sort of around the house a bit, so he's perfectly happy."

In pictures taken to mark Prince George's third birthday, the little royal caused controversy by offering Lupo a lick of his ice cream.

It prompted the RSPCA to warn people not to give dairy products to their dogs, as they can be toxic, although the animal welfare charity praised George for trying to help Lupo keep cool in the summer heat.

Spaniels, which were bred as gun dogs, are known for being high energy and Kate once wistfully commented on a charity worker's well behaved dogs on a visit to Keswick in the Lake District.

"Maybe we should lend you Lupo," she joked.

As recently as March, Kate revealed table tennis was a difficult activity in their household because of Lupo's determination to get involved.

During the couple's visit to the Republic of Ireland, she told young people at a respite centre in County Kildare: "We try to do this at home but our dog keeps catching the ping pong balls."

Lupo's mother Ella is understood to be owned by Kate's mother Carol.

James Middleton was very affected by the death.

He posted on Instagram: "Nothing can ever prepare you for the loss of a dog. For those who have never had a dog, it might be hard to understand the loss.

"However for those who have loved a dog know the truth: a dog is not just a pet; it is a member of the family, a best friend, a loyal companion, a teacher and a therapist."

He said he took Ella for a long walk and lit a candle in memory of Lupo after he got the sad news.