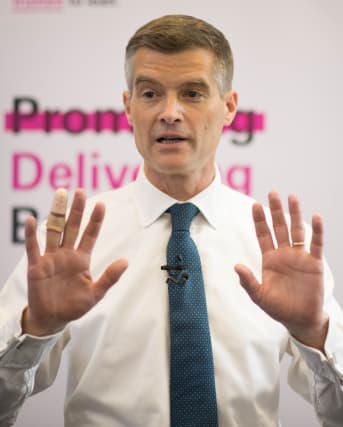 Conservative rebels are preparing to resist Boris Johnson's plans for restrictions to replace the national lockdown without extensive evidence they will save more lives than they cost.

The Covid recovery group (CRG), led by former chief whip Mark Harper and ex-Brexit minister Steve Baker, is threatening to withhold support for the Prime Minister's measures when the four-week lockdown in England expires on December 2.

The pair have written to Mr Johnson with their demands in a letter a source close to the group said had been signed by 70 Conservative MPs, though the individuals were not identified.

Mr Johnson has promised a House of Commons vote on his plans to replace the lockdown with a local, tiered approach.

In the letter, the CRG said that "even the tiered system of restrictions infringes deeply upon people's lives with huge health and economic costs".

"We cannot support this approach further unless the Government demonstrates the restrictions proposed for after December 2 will have an impact on slowing the transmission of Covid, and will save more lives than they cost," the MPs wrote.

They called for the Government to publish a "full cost-benefit analysis" of the proposed restrictions, as they warn "the lockdown cure prescribed runs the very real risk of being worse than the disease".

They raise specific concerns about outside sport, the 10pm curfew for pubs and restaurants, closure of non-essential retail and care home visits.

Their warning came as the Government announced a further 341 people had died within 28 days of testing positive for Covid-19 as of Saturday, bringing the UK total to 54,626.

Wary of the prospect of a backbench rebellion, the Prime Minister will hope that an offer to ease the restrictions around Christmas will appease critics.

But with the scientific advisory group for emergencies (Sage) guidance said to have suggested each day of greater freedom could require five days of tighter measures, the CRG has rejected this.

"We cannot live under such a series of damaging lockdowns and apparently arbitrary restrictions, and expect our constituents to be grateful for being let out to enjoy the festive season, only to have strict restrictions imposed on them afterwards that cause them health problems and destroy their livelihoods," the MPs wrote.