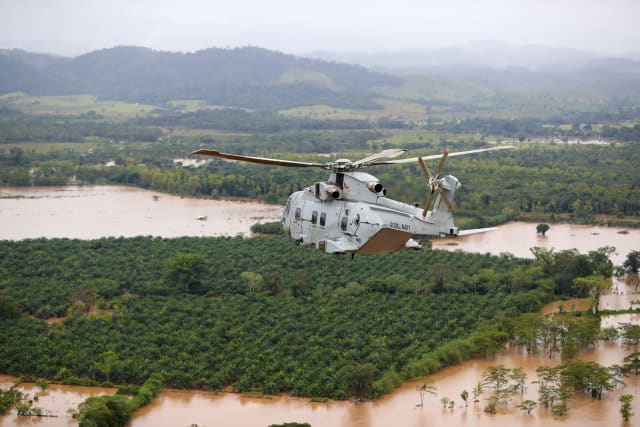 The Navy has been deployed in the region in the wake of hurricanes Eta and Iota earlier this month, which caused severe flooding and landslides.

Millions of Hondurans, still reeling from the Covid-19 pandemic, have been displaced and huge numbers are without food or clean water.

The Royal Navy recently deployed auxiliary support vessel the RFA Argus to the north coast of Honduras to support the US military in the ongoing disaster relief efforts.

The US army’s Chinook helicopters are using the ship as a refuelling point in their runs dropping supplies ashore, while airmen from 845 and 815 Naval Air Squadrons have been mapping the hardest-hit areas.

Three Royal Navy Merlin helicopters and a Wildcat have been flying reconnaissance missions to build up a picture of the situation on the ground below using specialist software.

The software is being used to identify areas in greatest need and share the information with those co-ordinating relief efforts to help them decide where best to drop aid.

Royal Navy Commander Kate Muir, head of the UK Task Group in the Caribbean, said: “The intelligence, surveillance and reconnaissance products we are providing are proving essential to relief operations, and they are critical to responding quickly to help the people of Honduras.”

Commanding officer of RFA Argus, Captain Kevin Rimell, said: “We’ve been asked to provide a refuelling facility for the US heavy-lift helicopters.

“The CH47 Chinooks have a huge lift capacity and a long endurance, but they need lots of fuel from us which lets them move around the region and move the much-needed supplies to those areas that are in desperate need.

“We are able to provide them this support as they don’t have those facilities in the region themselves.”

RFA Argus has been deployed to the Caribbean since April along with HMS Medway to provide support to British Overseas Territories during hurricane season.

The two vessels have also been involved in counter-narcotics operations.