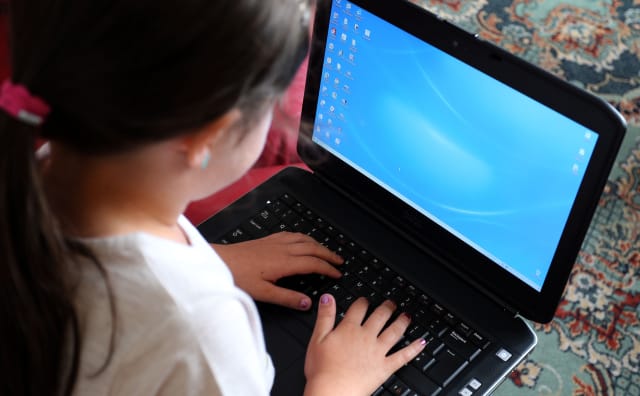 The majority of schools serving the poorest communities lack digital devices to ensure all their pupils can study at home if self-isolating, a survey suggests.

The charity Teach First said schools with the most affluent intakes are nearly three times (29%) more likely to use donations to pay for digital devices compared with schools with the poorest pupils (10%).

Nearly three in four (73%) school leaders said they do not have enough digital devices and internet access to ensure all self-isolating pupils can keep learning, according to the poll by the Teacher Tapp app.

Leaders of schools with the poorest pupils are more likely (84%) to say they do not have sufficient access to technology for their students than school leaders serving more affluent communities (66%).

It comes as recent Government figures show that nearly two in three secondary schools in England had at least one pupil self-isolating at home due to potential contact with coronavirus.

Approximately 6% to 8% of state school pupils – up to 615,000 children – did not attend school for coronavirus-related reasons on November 12, the Department for Education (DfE) figures show.

Last week, updated DfE guidance told local authorities and academy trusts to identify unused 4G wireless routers, which were handed out in the summer term, and reallocate them to children “with the greatest need”.

Teach First, which provides support to schools in disadvantaged communities, is calling on the Government and large businesses to provide more devices to schools to ensure poorer pupils do not fall further behind.

The poll, of more than 1,400 school leaders in England in November, suggests that schools are having to dip into alternative budgets to secure more devices.

More than a quarter (27%) of state school leaders said they are using, or are planning to use, their reserve budgets to pay for the gap in digital access for pupils, compared with 5% of private school leaders.

Nearly half (47%) of state school leaders said they will have to reduce other school activities to pay for devices and the internet, according to the survey.

More than a fifth (21%) of all leaders in state schools said they will have to reduce spending on textbooks and libraries, with a similar figure for school maintenance and upkeep (20%).

Kathryn Hobbs, head teacher of David Nieper Academy in Derbyshire, said: “At our school, we soon learnt pupils were using smartphones to complete homework rather than accessing the school’s online work platform on a suitable device.

“When it comes to schoolwork, a smartphone just isn’t sufficient – but the hard truth is that some families simply can’t afford the most appropriate IT equipment.”

She added: “For schools to continue to support all of their pupils throughout this pandemic, we need more access to IT devices, but looking into our budget, there’s not enough money to meet the need.”

Teach First’s chief executive Russell Hobby said: “It’s not right that some children will fall further behind at school simply because their families can’t afford laptops and internet access.

“All schools are doing their best in a challenging environment, yet the choices they face to make ends meet are deeply worrying – particularly if they have to cut vital areas of education to keep up with this urgent problem.”

Matt Hood, principal of Oak National Academy, a Government-backed virtual school launched during the lockdown, said: “For children to keep learning, they need access to resources, laptops, and internet data. These findings again reveal that too often it’s the poorest students who are being cut out.

“We now need to see co-ordinated action. Mobile networks must make educational websites data-free, enabling the one million children who can only access the internet through a mobile to keep learning. And businesses need to work with Government to increase the number of laptops distributed.

“Without this, our most vulnerable children risk falling further behind.”

A DfE spokeswoman said: “The department has purchased over 340,000 laptops this term alone to support disadvantaged children. By Christmas, this will be an injection of over half a million since the pandemic hit.

“This is part of over £195 million invested to support remote education and access to online social care, which includes 220,000 laptops and tablets and over 50,000 4G wireless routers already delivered to children over the summer term. At its peak, 27,000 laptops were delivered in a single day.”

She added: “We are entirely committed to ensuring as many disadvantaged children as possible benefit from receiving a device this term, and ensuring no pupil, no matter their background, loses out on an outstanding education.”