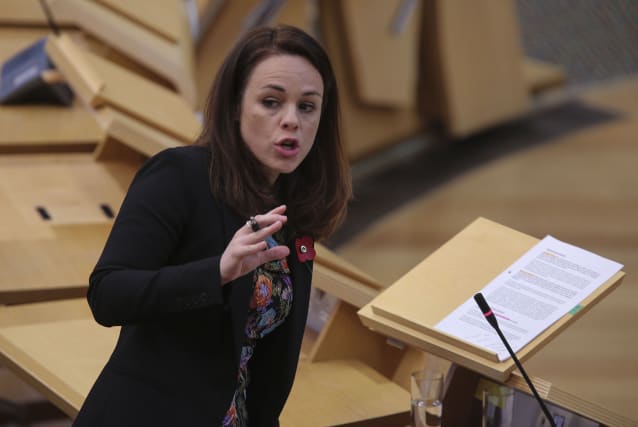 Scotland’s Finance Secretary Kate Forbes has urged the Chancellor to inject another £98 billion into the UK economy to help mitigate the impact of the coronavirus pandemic.

In a letter to Rishi Sunak ahead of his spending review on Wednesday, Ms Forbes warned against returning to the austerity policies put in place by his Conservative predecessors during the 2008 financial crash, instead lobbying for him to “invest for recovery, rather than balance the books”.

A £98 billion financial stimulus, the Scottish Government has said, would bring the UK in line with France, Germany and New Zealand where similar packages amounting to 5% of GDP have been announced.

In a wide-ranging six-page letter to Mr Sunak, Ms Forbes said: “The importance of fiscal stimulus has never been greater, and there is a strong case for increasing day-to-day government spending to support the economy.

“This increased spending must generate increased Barnett consequentials for the Scottish Government and clarity that funding for the NHS will be adequate to meet the continued costs of responding to Covid-19.

“My paper argues that a UK-wide £98 billion stimulus package should be the priority for the spending review, to support the resilience of businesses and households; to regenerate the economy and hasten the move to net zero; and to reduce inequalities. Such a package is even more necessary now given the uncertainty caused by the UK Government’s approach to EU exit.”

The Scottish Government has regularly been at odds with the Treasury throughout the pandemic over the timing of the UK budget and clarity over Barnett consequentials. The Barnett formula is a mechanism to give proportional levels of public expenditure to Northern Ireland, Scotland and Wales to reflect public service funding in England.

Ms Forbes has also repeatedly called for more borrowing powers for the Scottish Government, which she again raised in her correspondence with the Chancellor.

The UK Government has so far refused requests for greater devolved finance powers or the flexibility to move capital underspend over to day-to-day spending budgets.

Ms Forbes said it was vital to continuing the uplift of Universal Credit – which was increased by £20 per week at the start of the pandemic – beyond April next year.

“Many more people will have to rely on Universal Credit at this time of increased financial hardship and uncertainty, and people need to know that they can continue to rely on such support.”

Prime Minister Boris Johnson has hinted the uplift would not continue beyond April 2021, saying: “The most important thing we can do is to ensure that we get people into work and support families to get the jobs they need.”

An HM Treasury spokeswoman said: “All nations and regions of the UK have benefited from our unprecedented £200 billion coronavirus support package.

“We have protected hundreds of thousands of Scottish jobs through the furlough scheme, provided loans of nearly £3 billion to Scottish businesses and given the Scottish Government an additional £8.2 billion to tackle the impact of coronavirus.

“As we have throughout this crisis, we will continue to listen and respond to people’s concerns and work closely with the devolved administration in Scotland.”