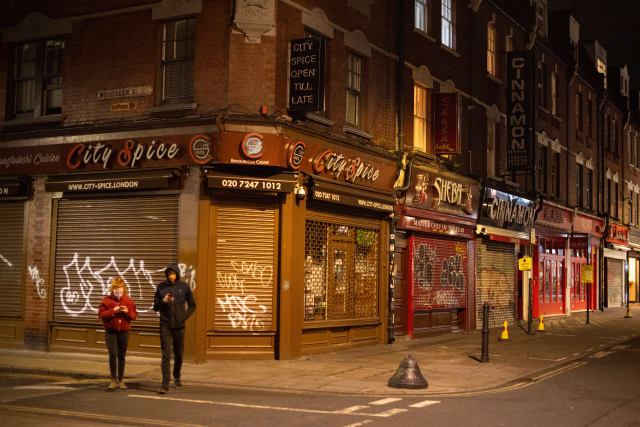 A former Tory minister has called for the Health Secretary to issue a correction to “avoid any damaging misunderstandings” after he signalled that the lockdown in England was showing “promising signs”.

Health Secretary Matt Hancock said the rate of coronavirus infections appeared to be flattening due to the tighter restrictions, which have been in place since November 5.

But Steve Baker, a prominent Conservative MP, said Mr Hancock’s statement flew in the face of scientific advice about any lockdown analysis.

“Government scientists briefing MPs were clear this week that the effects of lockdown would not be visible in the data until this weekend,” Mr Baker said.

“Cases may have flattened since lockdown, but any change is not yet because of lockdown.

“The Health Secretary knows this too. There is no excuse for a minister creating the impression this change was caused by lockdown.

“This statement should be corrected by the Health Secretary immediately to avoid any damaging misunderstandings about the interpretation of data.”

England is more than halfway through a four-week national lockdown, which is due to end on December 2, with pubs, restaurants, gyms and the majority of shops all forced to close, although schools have been allowed to remain open.

The row over the data comes after Mr Hancock said there were “promising signs that we have seen a flattening of the number of cases since lockdown was brought in”.

He told BBC Radio 4’s Today programme: “I’m calling it a flattening rather than a fall because one swallow doesn’t make a summer, but there are promising signs that lockdown is working to get the number of cases under control.”

Statistician Professor Sir David Spiegelhalter backed up Mr Hancock’s assessment that there was reason for positivity.

“He (Matt Hancock) said cases were stable – he’s being very cautious, but indeed they do seem to be showing a slow improvement,” Sir David told the Today programme.

But the chairman of the Winton Centre for risk and evidence communication at the University of Cambridge warned winter would prove a “real slog”, and predicted that the number of people in hospital with coronavirus – 16,000 people at present – would exceed the 17,000 peak reached in spring.

The debate over the success of England’s second national shutdown comes as Northern Ireland braces for a firebreak-style lockdown of its own next week, while Scotland’s toughest Covid restrictions will be imposed on 11 council areas on Friday evening in a move that will see non-essential shops, hospitality, gyms and beauty salons shut until December 11.

“So we think that firebreak period has succeeded. The question is whether it has succeeded enough, and whether people in Wales are now behaving in ways that allow us to capitalise on the ground we’ve gained, rather than seeing it frittered away.”

Mr Hancock added that Wales was seeing its infection rate “come down quite sharply” following the firebreak and that “across the UK as a whole, we are now just seeing a flattening of the curve”.

Data from the Zoe app coronavirus study run by King’s College London suggests the UK reproduction number – the R value, which represents the average number of people someone with Covid-19 goes on to infect – is around 1, which is seen as a stable rate of infection.

Figures compiled by PA news agency from the most recent data available, dating to the week ending November 15, show case rates are still rising in most local authority areas in England, with 197 out of 315 councils reporting increases.