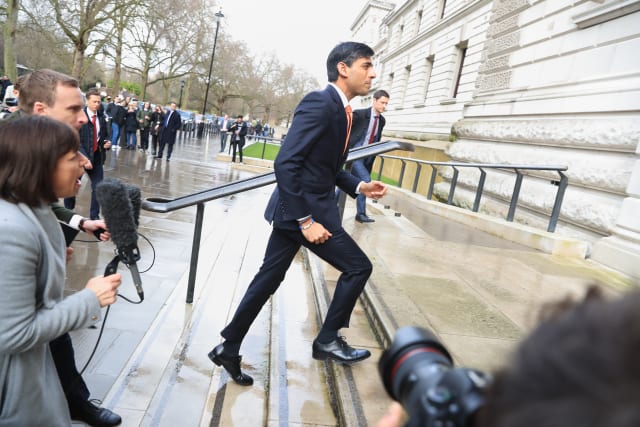 The Government is facing the threat of industrial action if it imposes a cap on the pay of millions of public sector workers.

Chancellor Rishi Sunak is reportedly preparing to announce a limit on the pay of millions of council staff, civil servants, teachers, police and other public servants when he unveils his spending review next week.

Frontline NHS doctors and nurses are expected to be exempt from any cap in recognition of their work during the coronavirus crisis.

Unions reacted angrily to the prospect of a wage freeze after such a tumultuous year, with one saying industrial action could not be ruled out.

The Treasury said it did not comment on speculation, but said public sector pay restraint was mentioned by Mr Sunak in July when the spending review was launched.

Mark Serwotka, general secretary of the Public and Commercial Services union, said: "Civil servants along with millions of other public sector workers have kept the country running throughout this pandemic, and the last thing they deserve is another pay freeze.

"Our members have been providing universal credit, collecting tax, securing our borders and prisons in this unprecedented pandemic and have already suffered 10 years of pay restraint.

"Private companies have been allowed to secure lucrative Covid contracts to the tune of £17bn, yet ministers are not prepared to reward their own staff for all the incredible work they have done this year.?

"If Rishi Sunak fails to pay public sector workers properly, there will be widespread anger and industrial action cannot be ruled out."

Rehana Azam, national officer of the GMB union said: "We will not stand by and allow public sectors workers to pay for this crisis with new austerity and a morale-sapping wage freeze. This is a kick in the teeth for those who have been fighting the pandemic.

"Workers have lost friends and loved ones. The crisis is still raging. Now they're being kicked while they're down."

TUC general secretary Frances O'Grady said: "A pay freeze would be a bitter pill for care workers, refuse collectors, emergency workers and all the key workers in the public sector who have helped keep the country going through this pandemic.

"Freezing their pay is no way to reward key workers for their service. Unions will fight for the proper pay rise they have earned. Working people must not bear the burden of the crisis."

A new report by the Centre for Policy Studies (CPS) said private sector workers had suffered far more from the economic impact of the disease.

The centre-right think tank said measures were needed to ensure the labour market was not unfairly weighted towards the public sector.

It said that a three-year pay freeze across the public sector could save up to £23 billion, helping to plug the hole in the public finances opened up by the pandemic.

Unison general secretary Dave Prentis said a new pay cap would be a "cruel body blow" to NHS staff not on the frontline.

"Key workers across ​all public services remain at the heart of the fight against Covid," he said.

"The Government must do what's right next week and announce the wage rise ​all staff have more than earned.

"Anything less risks destroying morale when the entire country is counting on them."

Mike Clancy, Prospect general secretary, said: "After a decade of pay austerity in the public sector which has seen pay increases lag behind inflation and the private sector, a further pay freeze across the public sector will be seen as an insult and have a devastating impact.

"At a time when the economy urgently needs demand and a level of confidence, to arbitrarily rule out even modest increases is economically illiterate."

Matt Wrack, general secretary of the Fire Brigades Union, said: "Firefighters have gone above and beyond to respond to the pandemic, from delivering vital supplies, to driving ambulances and moving the bodies of the deceased, but a decade of pay restraint has left them poorer today than they were before the global financial crash.

"It's brutally unfair to leave key workers to wade through the media rumour mill for answers about their livelihoods.

"Further attacks on pay would show utter contempt for working people. Rishi Sunak needs to come out and reject those calling for public sector pay restraint."

Dame Donna Kinnair, general secretary of the Royal College of Nursing, said: "Nursing staff have told the Government the level of pay rise they need this year.

"Nursing staff across the whole of the health and care system, from hospitals to social care, have gone above and beyond in the last year and all we have heard from the Chancellor is the sound of clapping in Downing Street.

"Now he must make good on this applause and give nursing staff the pay that finally recognises their skill, dedication and professionalism."

Shadow chancellor Anneliese Dodds said: "Workers on the Covid front line have kept our country going through this pandemic. Thousands of them have lost their lives in the process.

"Now, in the middle of a deadly second wave, the Chancellor wants to freeze their pay.

"This is the irresponsible choice to make for the economy. Freezing pay will leave people worried about making ends meet, that means they'll cut back on spending and the economy will take longer to recover."