Cressida Dick refuses to be drawn into Priti Patel debate 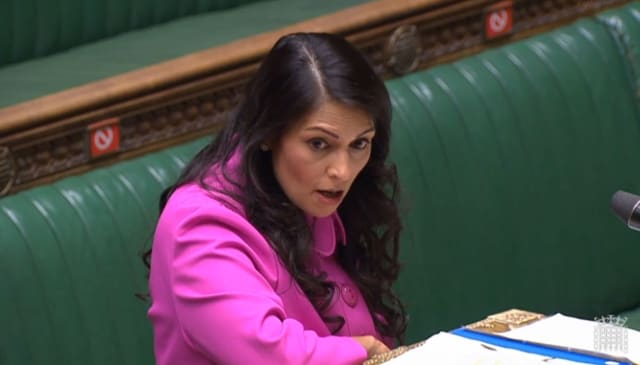 Commissioner Dick said her relationship with the Home Secretary had been "productive" and looked irritated as she refused to comment on "gossip".

The cop chief was appearing on LBC with Nick Ferrari.

Patel's tumultuous political career appears set to continue with the Prime Minister to reject demands to sack her amid reports she broke ministerial rules.

Reports the Home Secretary did not meet the requirement to treat civil servants with respect and consideration will prompt memories of the resignation of her chief civil servant, who alleged she belittled colleagues and led a "vicious and orchestrated" briefing campaign against him.

Sir Philip Rutnam's departure as permanent secretary in late February followed a series of clashes with Ms Patel, who was said at the time to be "absolutely livid" about allegations she bullied staff and was distrusted by spymasters.

A Cabinet Office investigation was launched in March over accusations she denigrated colleagues and clashed with senior officials in three different departments.

The 48-year-old is no stranger to controversy and her return to Government as Home Secretary when Boris Johnson became PM in 2019 raised eyebrows due to the manner of her departure from Cabinet in 2017.

Ms Patel was forced to quit Theresa May's Cabinet after having a series of unofficial meetings with the Israeli government.

The ambitious Brexiteer was widely believed to harbour leadership ambitions, and some Westminster watchers regarded the "freelancing" meetings with the Israelis as part of a possible drive to boost her personal contacts and standing ahead of an eventual pitch for the top spot.

Asylum seekers have been a recurrent issue since Ms Patel became Home Secretary.

Her department's entertaining of the idea that asylum seekers could be transferred to Ascension Island, a British overseas territory in the South Atlantic, was derided as "inhumane" by critics at home and as a "logistical nightmare" by authorities on the island in late September.

On November 11, a lawyer told the Commons Home Affairs Committee that Australia's offshore asylum system did not work and it was "deeply concerning" that Britain may be considering the same policy.

Later the same day, the Independent Chief Inspector of Borders and Immigration warned the Home Office has neither the "capacity nor the capabilities" to tackle Channel migrant crossings and the number of people smuggled into the country by lorry.

Ms Patel's department also suffered a significant setback in August when a deportation flight was halted after a surge in last-minute legal challenges.

The Home Office accused such claims of typically being "baseless and entirely without merit", but was forced to abandon using a video where it accused "activist lawyers" of trying to disrupt the asylum system.

The Home Secretary won plaudits in June when she confirmed all 30 recommendations of the review into the Windrush Scandal will be implemented by the Government.

But MP concerns prompted the launch of a new inquiry into the Windrush Compensation Scheme, which was set up after hundreds of thousands of people from Caribbean countries and their families were wrongly told they were in Britain illegally.

The probe announced on Wednesday comes after the most senior black Home Office employee in the team responsible for the scheme resigned this year and told The Guardian it was systemically racist and unfit for purpose.

Ms Patel has previously described the scheme as "complicated" and said she wanted to see payments "sped up".

Elected to Parliament in 2010 at the age of 38, Ms Patel achieved ministerial rank four years later as exchequer secretary to the Treasury, before promotion to employment minister following David Cameron's 2015 general election victory.

Her views on the death penalty were thrust into the spotlight in 2011 when she used an appearance on Question Time to say she would "support the reintroduction of capital punishment to serve as a deterrent" to "murderers and rapists" who re-offend.

But in 2016, she told MPs that she did not support the death penalty.

The Tory MP for Witham was born in Harrow, north London, in March 1972, the daughter of parents who came to Britain from Idi Amin's Uganda in the 1960s.

She studied at a comprehensive school in Watford before taking a degree in economics, sociology and social anthropology at Keele University and a post-graduate diploma in government and politics at Essex.