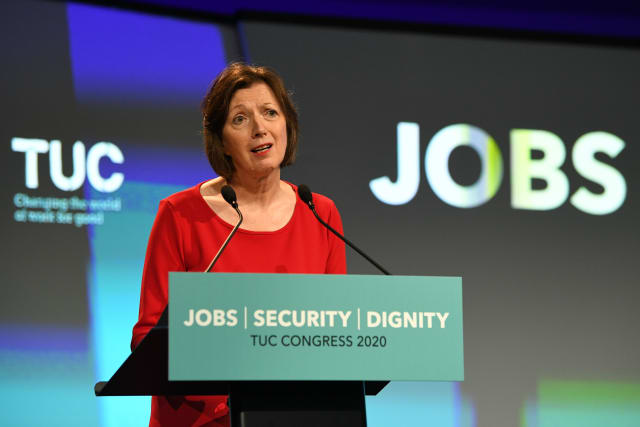 More young workers were made redundant during the summer than in all of 2019, a new study suggests.

The union organisation said its findings highlighted the “disproportionate” impact the Covid-19 economic crisis is having on young people.

Urgent investment is needed to create new jobs or a generation will be scarred by mass unemployment, warned the TUC.

This is largely the result of Covid-19 hitting sectors of the economy where young people tend to work, such as accommodation and food services, it was suggested.

Young people are more likely to be furloughed than older workers and in many cases this has come with a pay penalty, said the report.

According to the analysis 423,000 people aged 16 to 24 were paid below the minimum wage, either while on furlough or for other reasons, in April, compared with 64,000 the previous year.

TUC general secretary Frances O’Grady said: “We are on the edge of a national unemployment crisis. This generation of young workers must not be abandoned to mass unemployment.

“At next week’s spending review, we need action to create good new jobs across the country. That means fast-tracking investment in green transport and infrastructure on a much more ambitious scale than the Prime Minister announced this week.

“It means stepping in to help hard-hit industries like retail and hospitality – two of the biggest employers of young people.

“We must help young workers who lose their jobs get back on their feet quickly. They need decent financial support, not misery and destitution. The Government must boost universal credit payments.”

A Government spokesman said: “We know that young people have been particularly affected by the pandemic and our Plan for Jobs is creating hundreds of thousands of jobs for 16 to 24-year-olds through the Kickstart Scheme, increasing the number of apprenticeships and traineeships available, boosting funding for the National Careers Service and recruiting thousands of Work Coaches to support people into work.

“We have already paid out over £200 billion in support since the start of the pandemic and we will continue to support young people as we build back better.”