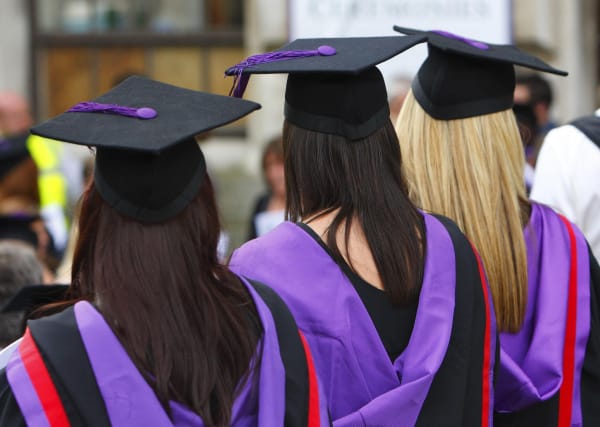 The proportion of university students in England awarded first class degrees has continued to rise, increasing by 88% in the last eight years, the higher education watchdog has found.

Analysis from the Office for Students (OfS) found that the proportion of graduates who attained top degrees rose from 15.7% in 2010-11 to 29.5% in 2018-19, prompting concerns about grade inflation.

Much of the increase cannot be explained by factors that may affect attainment, the report said.

Over 42,000 more students graduated with firsts in the summer of 2018-19 than eight years before, the figures showed, but the increase has “slowed” compared with previous years.

Ministers and the higher education watchdog have repeatedly called on universities to clamp down on grade inflation.

The data shows there has been a fall of 2.1 percentage points since 2017-18 in the proportion of students awarded the two top grades despite beginning university with grades below three Ds at A-level.

But students entering university with grades below DDD were still almost four times as likely to receive a first class degree in 2018-19 than in 2010-11.

The report concluded: “There is still strong evidence of significant unexplained sector attainment increases between 2010-11 and 2018-19.”

Nearly three-quarters (73%) of the 147 providers included in the analysis saw “unexplained” increases in first class degrees between 2017-18 and 2018-19, the analysis found.

“While this may indicate that the brakes have been applied, it is clear that grade inflation remains a significant and pressing issue in English higher education.

“Unexplained grade inflation risks undermining public confidence in higher education, and devaluing the hard work of students. Degrees must stand the test of time, which is why the OfS will continue to address this issue at both a sector-wide and individual university level.

“Where we have concerns about unexplained grade inflation at any particular university or college, we are prepared to intervene to protect the integrity of the degree awarding system for all students.”