MSP holds back tears as he pays tribute to vaccine volunteers, including mother 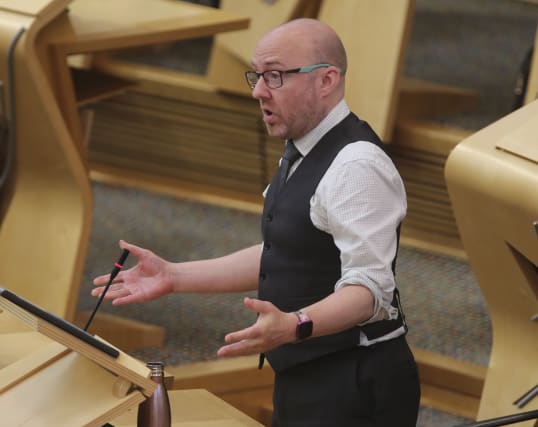 The co-leader of the Scottish Greens held back tears as he paid tribute to those who put themselves on the “biological frontline” volunteering for vaccine trials – including his own mother.

Patrick Harvie was speaking in the Scottish Parliament in a debate on new coronavirus restrictions which will put the toughest possible restrictions on 11 council areas.

Closing his answer, Mr Harvie said he wanted to end on an “up note”, before his voice cracked.

“Today, with many people looking forward to the prospect of a vaccine, I’ve got more reason than usual to be proud of my mum – my amazing mother – who has been a volunteer on the Oxford vaccine trial.

“We’re all amazed at the work of the researchers and the scientists who have opened up the glimmer of some hope here, but there are thousands of people around the world who have decided that they’re going to put their bodies into the biological frontline.

“We should pay immense respect to those many people, because if we as a parliament can show the same selflessness in the way that we do our work as they have shown, we’ll be not doing too badly.”

As Mr Harvie returned to his seat, MSPs across the chamber applauded his heartfelt intervention.

Fellow Green MSP Andy Wightman praised the leader for his speech on Twitter, saying: “Emotional speech by @patrickharvie emphasising the toll this virus is taking on all of us. His mum is a taking part in vaccine trials.

“Rose Harvie is a lovely woman I have had privilege of knowing from long ago. Bravo Patrick. Brave Rose.”

Mr Wightman was joined by SNP MSP James Dornan in his praise.

The Oxford University trial this week reported a “strong immune response” in adults aged between 50 and 60.