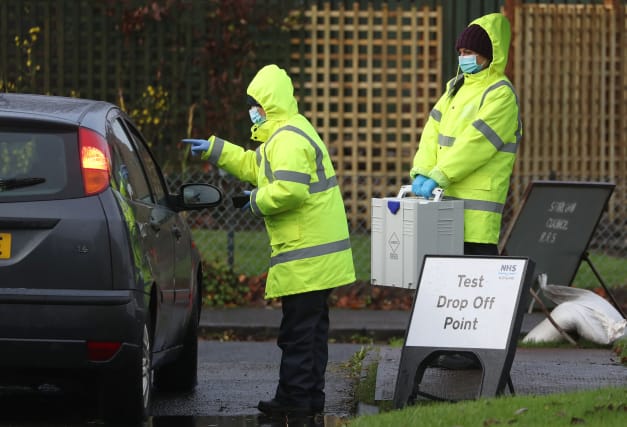 People infected with coronavirus are most likely to be highly infectious in the first week after symptoms appear, highlighting the need to identify and isolate cases early, research suggests.

Genetic material of Sars-CoV-2, the virus that causes Covid-19, may still be detected in respiratory or stool samples for several weeks, but no live virus was found in any type of sample collected beyond nine days of symptoms starting, the study found.

Researchers said people with the virus are mostly likely to be highly infectious for five days after symptom onset.

Lead author Dr Muge Cevik, of the University of St Andrews, said: “This is the first systematic review and meta-analysis that has comprehensively examined and compared viral load and shedding for… three human coronaviruses.

“It provides a clear explanation for why Sars-CoV-2 spreads more efficiently than Sars-CoV and Mers-CoV and is so much more difficult to contain.

“Our findings are in line with contact tracing studies which suggest the majority of viral transmission events occur very early, and especially within the first five days after symptom onset, indicating the importance of self-isolation immediately after symptoms start.

“We also need to raise public awareness about the range of symptoms linked with the disease, including mild symptoms that may occur earlier on in the course of the infection than those that are more prominent like cough or fever.”

The review published in The Lancet Microbe suggested people infected with Sars-CoV-2 are most likely to be highly infectious in the first week after symptom onset.

The study specifically looked at people infected with Covid-19 and mainly those who were admitted to hospital.

Researchers said the results are only relevant for the period of self-isolation for people with confirmed Covid-19, and do not apply to people simply quarantining after contact with someone infected.

Many countries recommend that people with the virus should self-isolate for 10 days, which the authors said is in line with their findings, cautiously covering the period of infectiousness.

Understanding when patients are most likely to be infectious is important for informing effective public health measures to control the spread of the virus.

The study looked at key factors including viral load – how the amount of the virus in the body changes throughout infection – and viral RNA shedding – the length of time someone sheds viral genetic material, which does not necessarily indicate a person is infectious, as this is not necessarily able to replicate.

It also looked at isolation of the live virus – a stronger indicator of a person’s infectiousness, as the live virus is isolated and tested to see if it can successfully replicate in the laboratory.

The researchers included 98 studies that had five or more participants, cohort studies and randomised controlled trials.

Seventy-nine focused on Sars-CoV-2, 73 of which only included patients admitted to hospital, eight on Sars, and 11 on Mers.

From these studies, the authors calculated the average length of viral RNA shedding and examined the changes in viral load and the success of isolating the live virus from different samples collected throughout an infection.

The longest length of time RNA shedding lasted was 83, 59, 35 and 60 days respectively.

Of the 11 studies that attempted to isolate the live virus, all eight that used respiratory samples successfully managed to culture viable virus within the first week of illness.

The studies that also measured RNA viral load demonstrated a link between the success of isolating the live virus with viral load levels.

Dr Cevik said: “These findings suggest that in clinical practice, repeat PCR testing may not be needed to deem that a patient is no longer infectious, as this could remain positive for much longer and does not necessarily indicate they could pass on the virus to others.

“In patients with non-severe symptoms, their period of infectiousness could instead be counted as 10 days from symptom onset.”

The highest Covid-19 viral load was detected early in the course of the disease – at the time symptoms begin, or before day five of symptoms.

In contrast, the viral loads of Sars and Mers peaked at 10-14 days and seven to 10 days after symptom onset respectively, explaining why transmission of these viruses can be effectively reduced by immediate identification, isolation and quarantine of people who show symptoms.