Future of warfare predicted by PM already with us, says defence chief 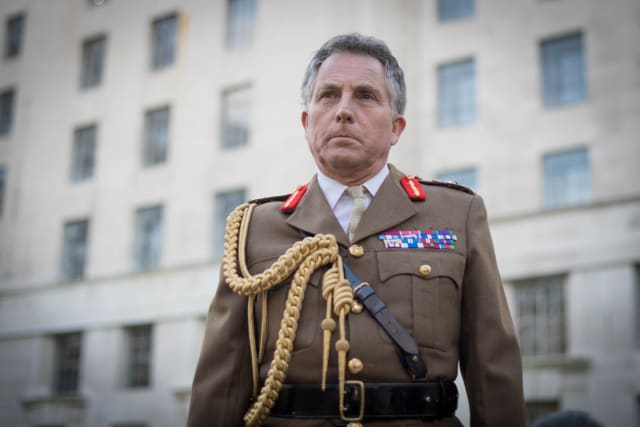 The advances in technology that Boris Johnson has promised to make available to UK armed forces is being used “here and now”, according to the country’s most senior military commander.

The Prime Minister made the case to MPs for the additional £16.5 billion for the Ministry of Defence – over and above the Government’s manifesto commitment to a 0.5% real terms increase for every year until 2024 – to be spent on technological advances that would include allowing soldiers to order a “swarm attack by drones” on enemies in the future.

General Sir Nick Carter, the Chief of the Defence Staff, said such scenes were already playing out on foreign battlefields.

Speaking to the PA news agency, he said: “(It is) not just the future – we’re seeing it today as well.

“If you study the way in which drones are being used in Libya, and for that matter in Azerbaijan and Armenia at the moment, the plain fact is that swarms of drones are undoubtedly here and now, and here for the future I would guess.”

Boris Johnson told the Commons that the fresh investment announced on Thursday would be poured into beefing-up the UK’s cyber capabilities, developing artificial intelligence (AI) technology and rocketing ahead with its space programme.

Sir Nick welcomed the cash injection, predicting that AI would help “speed up” decision-making time on the ground and allow British forces to “outmanoeuvre” their opponents.

He also said it would be “madness” if the UK did not make further ventures into the “space domain”, given the benefits it could bring in terms of added security.

The Government has said a new RAF Space Command will launch British satellites and the country’s first rocket from Scotland in 2022.

“The space domain gives us the most extraordinary opportunities when it comes to situational awareness and to our intelligence, surveillance and reconnaissance assets,” Sir Nick told PA.

“For us, it would be madness if we didn’t avail ourselves of that domain in order to amplify the capabilities that we’ve got in other domains.”

The Royal Navy was given a major boost by Mr Johnson – in a move backed by the defence chief – as he vowed to use the extra defence spending to “restore Britain’s position as the foremost naval power in Europe”.

The Prime Minister praised the country’s air carrier resources and confirmed the building of more battleships on home soil, giving the go-ahead to eight Type 26 and five Type 31 frigates, along with money to develop “the next generation of warships”.

Asked why there had been a renewed focus on the Navy, Sir Nick suggested that the UK, which is set to be free of European Union rules next year, could play an increased part in policing global trade routes.

“We are a maritime power, we are an island,” he said.

“And of course the global economy has to move through some narrow straits and we have seen over the last 15 to 20 years the challenge of piracy but what we don’t want to see is our ability to move on those global commons being limited.

“So it is entirely logical that we would, as a country that is problem-solving and burden-sharing, want to try and make that rules-based system work effectively.

“And our maritime contribution to that is one that our allies and partners would respect and appreciate.”