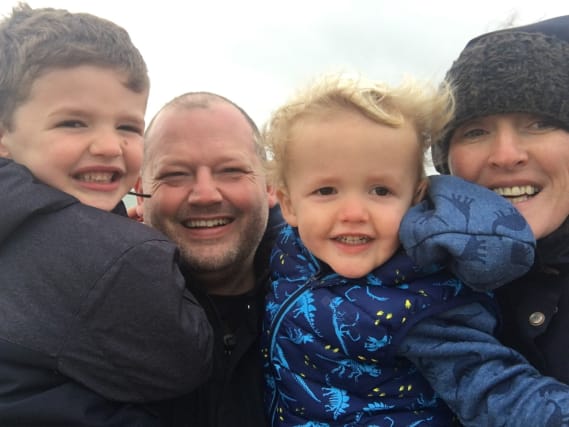 A family who almost died of carbon monoxide poisoning have told of their terrifying ordeal in hopes of educating people about the silent killer.

Nicola Savory, her partner Lee Tonks and their sons James, five, and Harry, two, were an hour from tragedy when an emergency gas engineer called at their home in Bedworth, Warwickshire.

Unknown to them, their house had filled with deadly carbon monoxide leaking from a broken boiler flue.

The family had no CO alarm fitted, but a neighbour’s alarm had been triggered after it began picking up a low reading, leading to a callout for 34-year-old Cadent gas engineer Mo Dawood.

Mr Dawood then went next door to Ms Savory’s address and knocked on the door.

As he waited for someone to answer, following procedure, he put his gas detection reader through the letterbox and found the home flooded with a potentially lethal dose.

Mr Dawood said: “The CO reading I got right then was so massive I couldn’t believe it.”

The reading was nearly 600 parts per million (PPM) CO, which is deadly if exposure continues for a few hours.

He added: “No-one was answering so I gave the door a real bang and a lady (Ms Savory) eventually came to the door.

“I could see straight away she had big red circles around her eyes, so I ordered her and everyone in the house to get out as quickly as possible.

“The dad (Mr Tonks) came to the door but didn’t look right. He said he’d been in bed because he had been out on a rugby do the night before and had had a few beers. He started wobbling and collapsed.”

The family were taken by ambulance to Coventry’s University Hospital, where they were treated for carbon monoxide poisoning.

Mr Dawood said: “When I think back, I remember that I’d finished my previous job earlier than expected, which meant I arrived on site sooner – that turned out to be so vital in this case. If I’d have got there any later, we might have been dealing with a different situation.”

Two years later, the couple are urging people to follow Cadent’s safety advice, getting the boiler serviced annually and and buying and fitting an audible CO alarm.

The family’s plea coincides with Carbon Monoxide Awareness Week, which runs until November 29.

“Someone was looking down on us that day,” said Ms Savory.

The 40-year-old added: “I think about it a lot, when I look at my children and Lee.

“When we came back from hospital, and the children were finally asleep, both of us were crying. We realise how unbelievably lucky we were.

“It boggles my mind that we never had a carbon monoxide alarm in the first place. We had not long had a new boiler fitted and it probably fell off the radar.

“Until it affects you personally, you just think ‘it would never happen to me’. But it very nearly did and I would just ask everyone to learn from this, buy an alarm, or a few of them, and make sure you get that annual safety check on your appliances.”

Mr Tonks, 40, said: “If Mo hadn’t knocked on our door that morning we wouldn’t be here now, so we owe him everything.

“I’d been out the night before and thought I just had a bad hangover. I felt nauseous and light-headed, and as soon as I went outside I just collapsed.

“The shops must have quickly sold out of carbon monoxide alarms shortly after because my friends and family will have bought all of them.

For more information on the carbon monoxide and safety advice visit www.cadentgas.com/co