Commercial barges ‘should be part of PM’s green industrial revolution’ 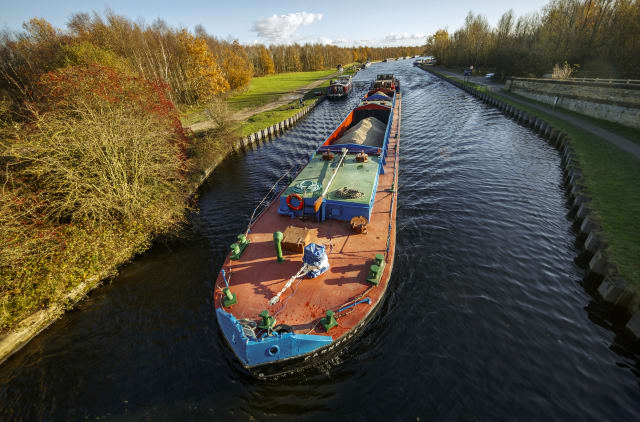 The Government should invest in inland waterways if it is serious about a green industrial revolution, according to the barge transport industry.

John Dodwell, of the Commercial Boat Operators Association, said moving cargo by barge is more environmentally friendly even than using electric lorries and there should be more of focus on a sector which is gradually bouncing back from a low point in the 1980s.

Mr Dodwell was speaking in the wake of the restoration of commercial barge deliveries from the Humber to Leeds for the first time in 20 years and as excitement grows in the industry about plans for a new inland port in the West Yorkshire city.

He said: “Barges produce far less noxious emissions than lorries do. There have been some figures saying they produce only 25% of the CO2 which vehicles do.

“But, even if all lorries had electric engines, there would still be wear and tear from tyres, from brake pads and from brake surfaces, putting nasty particulates into the atmosphere, which we breathe in.

“So, if you want to be really green and get rid of all that nasty dust then ‘go barge’.”

“One barge carrying 500 tonnes has a two-man crew. They can carry that cargo from Hull to Leeds more quickly than if they each drove an HGV up and down the M62.

“So, although it may appear to be slow, it actually gets the cargo there sooner.”

Mr Dodwell said: “The green credentials of waterborne transport have been acknowledged for some time but the Government doesn’t do anything about it.

“I was looking yesterday at some road improvements. Who is paying for it? The Government.

“Who’s going to pay for waterway improvements? Well, the Government isn’t offering to do so. Why not? If they want to go green, we need to improve our waterways so they can take bigger barges.”

Mr Dodwell said the Aire and Calder Navigation, which is the conduit for the recently reinstated Goole to Leeds building aggregate deliveries, is big enough for the barges currently available.

But he said that an expansion of the industry could soon see a demand for bigger vessels, especially as he believes the Government should also be looking at transporting containers by canal.

“There is talk of even bigger lorries,” he said. “There’s talk of one lorry pulling another. And that increases the productivity of the lorry driver.

“Why can’t we have similar improvements paid for by the Government for the waterways.”

Mr Dodwell said there was potential for the expansion of traffic on the Aire and Calder as well as a number of other waterways around the UK where commercial barge operations are growing.

And he pointed to the central role barges on the River Thames are playing in the many tunnelling projects ongoing in London, from the Super Sewer to Tube line extensions.

Mr Dodwell said: “All this goes past the Houses of Parliament but it goes so quietly most MPs don’t realise what’s happening.”

He said planning permission has been granted for a new inland port at Stourton in Leeds, which is located close to the motorway and rail networks.

He said the case made for the port envisaged it receiving 200,000 tonnes of freight a year but he said the capacity would be 825,000 tonnes – a figure which he said would take 60,000 lorries off the road.

Barge owner John Branford, 75, who has been working on the waterways for 60 years, said: “The tide pushes me to Goole and, when I go back to Hull, the ebb takes me back. So you’ve got one engine going, using a fraction of the fuel, environmentally friendly and all the rest of it.

“I love the job and enjoy doing it and I’m hoping to get it going again and prove it’s environmentally friendly and cost effective.”