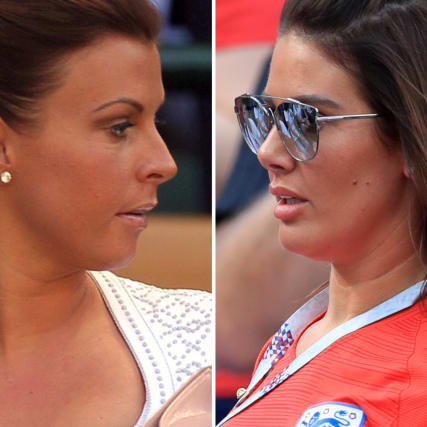 Coleen Rooney “pointed the finger” at Rebekah Vardy as “the villain” who allegedly leaked stories about her private life to the media, the High Court has heard.

Mrs Rooney, 34, was dubbed “Wagatha Christie” on social media for her apparent sleuthing work, having “posted a series of false stories to see if they made their way into The Sun” as part of a “sting operation”.

Mrs Rooney said she planted three stories about her travelling to Mexico to “see what this gender selection is all about”, returning to TV and the basement flooding in her new house.

“I have saved and screenshotted all the original stories which clearly show just one person has viewed them.

Mrs Vardy, who is married to Leicester City striker Jamie Vardy, denies the accusations and is suing Mrs Rooney for damages for libel.

At the first hearing of their high-profile legal battle on Thursday, Mr Justice Warby was asked to determine the “natural and ordinary” meaning of Mrs Rooney’s posts.

Mrs Vardy’s lawyers argue the meaning of Mrs Rooney’s posts was that she had “consistently and repeatedly betrayed the defendant’s trust over several years by leaking the defendant’s private and personal Instagram posts and stories for publication in The Sun”.

But Mrs Rooney’s legal team say the posts mean “there are reasonable grounds to suspect that the claimant was responsible for consistently passing on information about the defendant’s private Instagram posts and stories to The Sun newspaper”.

Mrs Vardy’s barrister Hugh Tomlinson QC said: “The fact that both women are married to professional footballers has led to this action being trivialised in some media coverage as ‘Wag wars’, but the impact on Mrs Vardy was not trivial.”

He told the court Mrs Rooney’s posts were an “untrue and unjustified defamatory attack” which was “published and republished to millions of people”.

Mrs Rooney’s accusation “leaves the reasonable reader in no doubt that the defendant is accusing the claimant of consistently and repeatedly betraying her trust over several years”, Mr Tomlinson argued.

He added: “In fact, she did nothing wrong. Whatever leaks there were did not come from her.”

Mr Tomlinson said Mrs Rooney’s post featured “a build-up to the ‘big reveal’ of the identity of the person responsible”, adding: “The description of the defendant’s detective work makes it clear that the claimant is being said to be responsible for the leaking of the three specific stories mentioned.

“The person is Rebekah Vardy, the finger is being pointed at her, as the villain, the person, the someone, the one person.”

The barrister also said the parties had agreed for a “stay” of the proceedings until February, so there could be “one final attempt to resolve the matter without the need for a full trial”.

David Sherborne, representing Mrs Rooney, said in written submissions: “It is true that the claimant was responsible for consistently passing on information about the defendant’s private Instagram posts and stories to The Sun, and that this was part of her history and practice of providing private information to the press, especially The Sun, with whom she had a very close relationship.”

He said Mrs Rooney’s post accusing Mrs Vardy of leaking the stories “followed earlier warnings which the defendant had been forced to post publicly, as well as privately, as a result of information from her private social media accounts being leaked to The Sun”.

He added: “The defendant was so concerned that she even posted a number of fake stories on her private Instagram account in order to discover where the leak was coming from.”

Mr Sherborne told the court Mrs Rooney conducted a “sting operation” to find out the source of the leaks, and “deliberately limited the accessibility to this private account and the sting operation stories” to just Mrs Vardy.

He said: “The fact that these sting operation stories also then appeared in The Sun, after access to her private account was limited to just the @beckyvardy account, is the reason why the defendant published the post which is the subject of this claim.

“The impression the reader would take away would be the essential message, that it was Rebekah Vardy’s account that was the source of private stories about the defendant appearing in The Sun – not Rebekah Vardy herself.

“The impression the post gives the ordinary reader stops short of guilt.

“Mrs Rooney intends to defend these words as true in whatever meaning.”

At the conclusion of the hearing, which lasted just over an hour, Mr Justice Warby said he would give his ruling on Friday afternoon.

In her written claim previously filed with the court, Mrs Vardy said she had worried she would lose her baby because of the stress as she was pregnant at the time.

She also “suffered extreme distress, hurt, anxiety and embarrassment as a result of the publication of the post and the events which followed”, her lawyers allege.

Neither Mrs Vardy, who was in Nottingham for Dancing On Ice rehearsals at the National Ice Centre, nor Mrs Rooney attended the hearing at the Royal Courts of Justice in London.