Bid to save ancient wildwood lichen with move to new trees 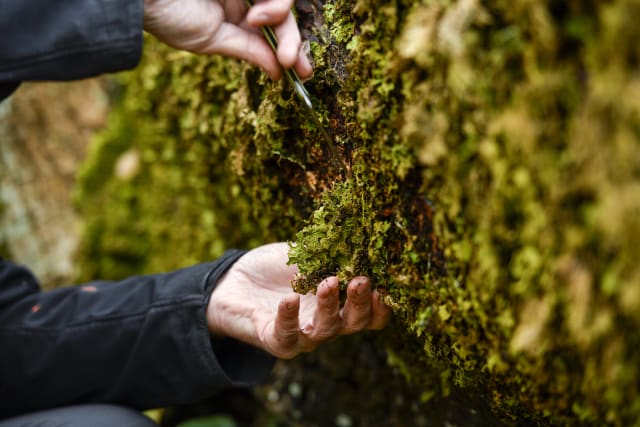 An attempt has been made to save one of England’s rarest lichens by transferring it from a fallen oak to nearby trees, the National Trust said.

The lungwort lichen (Lobaria pumonaria) is a survivor of the ancient wildwood that grew in Britain after the last ice age, and its presence has traditionally been an indicator of a healthy woodland.

But the frilly, greenish-gold lichen has become increasingly rare in England since the 18th century as a result of air pollution – which lichens are particularly sensitive to – and habitat loss.

In the Lake District it exists in only a handful of sites, including on a veteran oak tree in Borrowdale which formed what is thought to be the single largest community of the species in England.

The tree, thought to be between 200 and 300 years old, blew down in storms earlier this year and the lichen would die if it was left, conservationists said.

A team has carefully removed a large patch of lungwort from the oak and reattached it to new trees using wire mesh, staples and eco-friendly glue, and rubbing its reproductive parts directly on bark in efforts to help it survive.

It has been “translocated” to dozens of other trees across Borrowdale to give it the best chance of survival and it is hoped placing it high on trunks will give it the light it needs to establish and grow, and protect it from slugs and snails.

Lungwort lichen also needs high levels of water and the extensive woodlands of Borrowdale regularly receive more than 3.5 metres of rainfall a year, making it a suitable habitat.

The translocation method has worked for other lichen species but there has been a very low success rate for lungwort outside Scotland, the experts said.

A previous attempt to translocate the species in the Lakes in the 1980s was only 1% successful, but it is hoped this bid to move three square metres, with a total of more than 100 translocations, will fare better.

It has been carried out by the National Trust, which manages Borrowdale, in partnership with the British Lichen Society, Cumbria Lichen and Bryophyte Group and Plantlife.

Maurice Pankhurst, woodland ranger at the National Trust said: “The communities of lichens and bryophytes in Borrowdale is one of the finest in northern Europe.

“Just as an art gallery would protect their collection of fine and rare paintings, it’s essential for us to protect these rare species.”

He said air pollution had long been a problem, from a historical copper smelting works in Keswick to acid rain caused by sulphur dioxide emissions.

“Although the impact of acid rain has declined, nitrogen pollution is now more of a problem, arising from increased road vehicles and intensive agriculture, which is having a huge impact on these Atlantic woodlands and the old growth lichens which need very clean air to thrive.

“This is particularly pertinent after this summer when we witnessed increased numbers of visitors to the Lake District after lockdown restrictions eased,” he said.

April Windle, Cumbria Lichen and Bryophyte Group member, who championed the translocation, said: “We hope, that with assistance of mesh, staples and glue, the lichen will eventually attach, become independent and reproduce.”

She said lichens – which photosynthesise, regulate water and carbon cycles, provide food for invertebrates and nesting material for birds – “are such amazing lifeforms and play such a fundamental role within these woods”.

The presence or absence of certain lichen can be used to indicate the health of the habitat they are found in and can act as an early warning of environmental changes, she added.