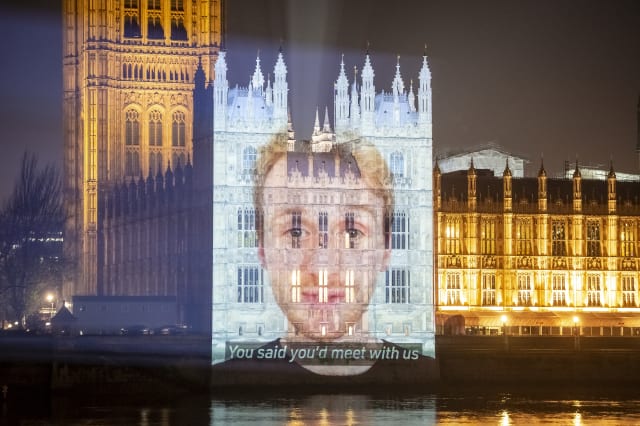 Grieving families who lost loved ones during the first wave of the coronavirus pandemic have projected video messages on to the Palace of Westminster asking the Prime Minister to meet with them.

Organised by campaign groups Led by Donkeys and Covid-19 Bereaved Families for Justice UK, the relatives featured in the videos urged Boris Johnson to stop “ignoring” them.

Deborah Doyle, whose mother Sylvia Griffiths died of the virus in April aged 76, said: “We have written to you, the group that I am involved in, many times. In Parliament, you have said you will meet with bereaved families.”

Jamie Brown, whose 65-year-old father Tony Brown died of Covid-19 in Colchester General Hospital on March 29, added: “You said you’d meet with us and then went back on your promise. So now you are ignoring us we decided to bring our message to the Houses of Parliament.”

Lobby Akinnola, whose father Olufemi died from the virus in April, said: “I would do anything to have my dad back, but I can’t. So instead I’m going to try and emulate him – and care for other people, and use everything I can to make sure that no-one else has to experience this.

“There are lessons to be learned here that can prevent other people from feeling the pain that I feel every day.”

Sharing footage of the projections on Twitter, Covid-19 Bereaved Families for Justice UK said: “The Prime Minister won’t meet with us. So we’ve taken our message somewhere he can’t ignore us. #CovidInquiryNow.”

The campaigners are calling for a statutory public inquiry into the Government’s response during the first wave of the virus.

It comes after more than 200,000 people signed a petition calling for such an inquiry, arguing it should have a “rapid review” phase so initial findings are reported back within weeks – as happened with the Hillsborough disaster.

Covid-19 Bereaved Families for Justice UK, which represents 1,450 families, said in August that it had written to Mr Johnson three times and asked to meet and share their experiences.

However, it was told the Government could not meet the families due to the “current pandemic”.