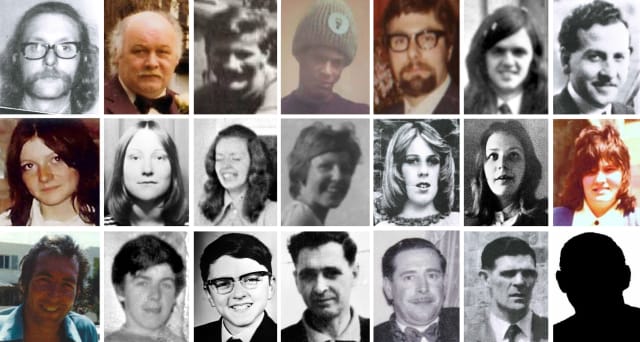 A man has been arrested over the murders of 21 people in bombings in the Mulberry Bush and Tavern in the Town pubs in Birmingham in November 1974.

– Trevor Thrupp, a 33-year-old rail guard and married father of three, who loved taking his son and daughters on holidays to Sandy Bay in Devon and Great Yarmouth.

He had an “infectious” laugh, and loved Laurel and Hardy, The Goons and especially Spike Milligan.

“His love for his family is still with us today and always will be,” his son Paul Thrupp said.

– John Rowlands, 46, was a qualified electrician and worked as a foreman at Land Rover in Tyseley, Birmingham.

A married father of two sons, he served with the Fleet Air Arm in the Second World War, and the Mulberry Bush was his favourite pub.

His youngest son Paul remembered him as “a bit of a card, a joker” and a “good dad”, while his oldest child Stephen said they lost “a great friend” when he died.

– William Michael “Mick” Beasley, 30, was a stock controller at a motor company, whose father had died four months before the bombings.

He led a quiet but full and active life, collected coins, and had a keen interest in film and cinema.

He owned an 8mm camera, and was a regular in the projector room of the Odeon in New Street.

The night of the bombing, the wife of the Mulberry Bush landlord, Mary Jones, recalled Mr Beasley had found a lucky Cornish pixie charm on the night bus into town, and gave it to her.

She survived the bombing, and told how she had kept it ever since.

– John Clifford “Cliff” Jones, 51, was a railway station postal worker, and a father-of-four.

As a soldier with the Durham Light Infantry in the Second World War, he survived being machine-gunned in combat in 1945, and spent weeks convalescing in a Carlisle hospital.

He was a keen gardener and the Cliff Jones Memorial Trophy is still awarded to Birmingham’s best kept allotment, his son George said.

Mr Jones said his father was “cruelly robbed” of the chance to live and see his family grow.

– James Caddick, 56, was a porter at nearby Birmingham markets, a divorcee and a father-of-two.

A Mulberry Bush regular, Mr Caddick was standing with his friends, Mr Bodman, Mr Thrupp, Mr Rowlands, Mr Beasley and Mr Jones in their usual spot at the end of the bar – just feet from where the bomb was planted.

– Father-of-three Stan Bodman, 47, an electrician, was “larger than life” and “very popular”, his son Paul said.

An ex-RAF wartime serviceman, he told his son there was nothing to fear from IRA bombs as they were not “military or political” targets.

“We certainly got that wrong,” Paul Bodman said.

– Charles Gray, 44, was a mechanic at British Leyland in Longbridge, and had never been in the Mulberry Bush before the night the bomb went off.

He never missed a day’s work, and those who knew him said he had “an easy charm and a slight air of mystery”.

His family said he was a “lovely, quiet man” and a “gentleman, mild-mannered and agreeable”, always known for being well-dressed.

– Pamela Palmer, 19, was an office worker who used to take her three-year-old niece shopping.

Her older sister Pauline Curzon said: “She was a lovely sister. She helped me in numerous ways.

“Her companionship and kindness is a memory I treasure.”

She was there with her boyfriend, Derek Blake, who was in intensive care for days afterwards and lost a leg in the blast.

– Walking past outside and caught in the blast were Paul Davies, 17, and Neil “Tommy” Marsh who, at 16, was the youngest victim.

Tommy’s cousin, Danielle Fairweather-Tipping, said he and Paul had a “very strong” bond, and enjoyed the “carefree life” of teenagers.

She said: “His death has been a devastation to our family and words really can never explain this.”

He died three months before Mr Bridgewater was born, but his son said: “I feel his spirit still lives on in me.”

– Thomas “Tom” Chaytor, 28, born in Iver Heath, Buckinghamshire, was a retail assistant at Willoughby Tailoring and a part-time barman.

Adopted as a child, he was a divorcee and father-of-two who, three weeks before the bombs, had started a job on the bar at the Tavern to earn extra money, his then fiancee Susan Hands said.

He died of his injuries on November 27, a week after the blast.

– Maxine Hambleton, 18, was a shop assistant at Miss Selfridge in Lewis’s department store, in the city centre.

She was a “beautiful soul”, her sister Julie Hambleton said, and died not knowing she had been the first in her family to earn a place reading law at university.

– Jane Davis, 17, who had her eyes set on being a nuclear physicist, was with her co-worker and close friend Miss Hambleton in the Tavern in the Town when she was killed.

She and Miss Hambleton had gone on a coming-of-age grape-picking holiday to the vineyards of France earlier that year, and she sent a postcard home describing how “my back is bloody killing me”.

Her family remembered their “loyal” and “much-loved” daughter, sister and friend, who had the chance of being a mother and a wife “taken from her”.

– Anne Hayes, 19, was another retail assistant working at Miss Selfridge, who was in the Tavern that night.

She lived with her parents and had been an apprentice hairdresser before taking up retail.

– Marilyn Nash, 22, was a supervisor at Miss Selfridge, and was out with her friend Miss Hayes.

– Eugene Reilly, 23, was a Deep Purple and Black Sabbath fan and his younger sister Mary recalled seeing him play air guitar to his LPs in the lounge of the family home at weekends.

Shy, but “very sociable”, he a was a keen rollerskater, and went to a rink several times a week.

He was out with his married younger brother that night in the Tavern.

– Desmond Reilly, 21, had invited his brother to the city to celebrate news that his wife Elaine was pregnant – though he would not live to see his son’s birth.

The family said: “Eugene never had the opportunity to get married and have children, and Desmond never got to meet his son – part of us died with them on the day they died.”

– Stephen Whalley, 21, was a quantity surveyor in town on a date arranged through the New Musical Express’s lonely hearts club page.

His mother said: “While I would love the world to know about my son Stephen, and the lovely young man he was, it is just too difficult and painful for me to recall any memories I have because it is too traumatic to remember.

“Stephen was our only child, who had his whole life ahead of him.”

– Mr Whalley’s date was Lynn Bennett, 18, a punch-card operator, and the two died together in the Tavern in the Town.

She was “very petite and looked great in miniskirts and platforms”, her sister Claire Luckman said.

A passionate Birmingham City fan, her grieving father never set foot in the ground again after her death.

– Maureen Roberts, 20, was a wages clerk at Dowding and Mills, and was due to be engaged to her boyfriend Fred Bromley.

An only child with a “happy-go-lucky” side, she also had a caring nature, buying Christmas presents for neighbours.

Mr Bromley said she had striking auburn hair, “the colour of gold, when the sun shone on it”.

“Everyone would remark on it wherever she went,” he added.

– James “Jimmy” Craig, 34, was an motor plant worker and amateur footballer who once had a trial with Birmingham City.

He was the last victim of the bombings, dying on December 9 of injuries he sustained in the Tavern.

Mr Craig, who could neither read nor write, was only in the pub that night to meet a girl who had written to him.

His brother Bill said he would never have been at the Tavern had the letter remained unread, but his brother had asked their mother to read it for him.