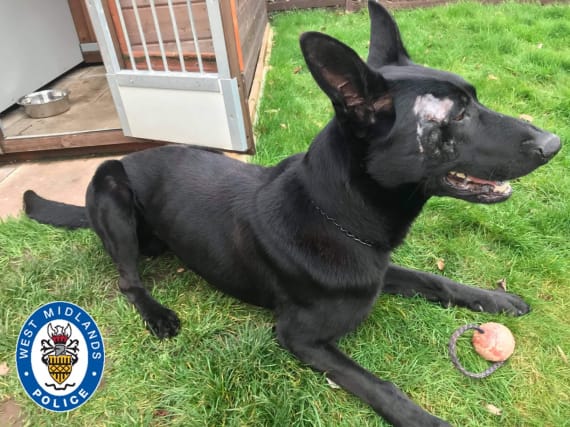 A 16-year-old youth has been charged with causing unnecessary suffering to a police dog who was struck with a machete while tracking burglary suspects.

The boy, who cannot be named because of his age, is also facing a charge of possessing a bladed weapon, West Midlands Police said.

News of the charges was announced a day after the force confirmed police dog Stark is expected to make a full recovery from surgery to stitch together wounds near his right eye.

The three-year-old German Shepherd and Belgian Malinois cross, who was injured in the early hours of Saturday in the Handsworth area of Birmingham, is expected to return to duty within the next few weeks.

A police spokesman said the 16-year-old was charged on Tuesday after being released from hospital, where he received treatment for dog bite injuries.

A statement released by the West Midlands force said: “The teenager, who’s living in Handsworth, has been charged with possessing a bladed weapon and causing unnecessary suffering to a protected (service) animal under the Animal Welfare Act 2006.

“PD Stark is continuing his recovery at home where he’ll stay for around two weeks until his wounds have fully healed.”

The charged youth has been bailed under a curfew to appear at Birmingham Youth Court next month.