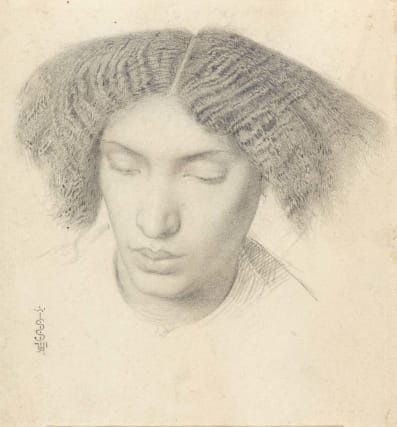 Scotland’s poet laureate Jackie Kay has told how a drawing of Victorian artists’ muse Fanny Eaton inspired her while in lockdown.

Kay, 59, who has been Scots Makar since 2016, saw portraits of Jamaican-born Eaton while browsing the online archives of Cambridge’s Fitzwilliam Museum.

They were drawn by British artist Simeon Solomon in around 1859 and prompted Kay to write a poem while spending lockdown in Manchester, titled Fanny Eaton, The Jamaican Pre-Raphaelite Muse.

Eaton was born in 1835 and arrived in London with her mother as a child, shortly after slavery was abolished in British colonies.

She worked as a domestic servant and modelled for portrait artists, catching the attention of the Pre-Raphaelite Brotherhood.

“You hardly ever get to see black Victorians and you certainly don’t see them in artwork in this way so that was so fresh,” Kay told the Fitzwilliam Museum’s In My Mind’s Eye podcast.

“I thought ‘gosh I wonder where you’ve been all my life’.”

She said it was a “breath of fresh air” that Eaton was shown as “quite free” in the drawings.

“It’s very unusual to see somebody that isn’t put into a particular sort of typecast role, you know that’s neither an escaping slave or court jester, she’s not some domestic member of a family, she’s not painted as just being some part of a white family’s show-off black servant, like you see in so many of the paintings of that period,” said Kay.

“She’s not owned by anybody in these paintings.

“She’s quite free, and that’s really different and she’s a breath of fresh air, particularly these graphic sketches because they just feel so contemporary and alive, it’s just a skip and a jump away.”

She said that “who we remember, who we celebrate, who we make statues of” is important, adding that it was “absolutely exhilarating” when the statue of slave trader Edward Colston was toppled in Bristol during a Black Lives Matter protest.

Eaton was celebrated with a Google Doodle on Wednesday.

The Fitzwilliam Museum is to display two portraits of Eaton by Simeon Solomon when it reopens, which is expected to be on December 3.

To listen to the podcast, see https://beta.fitz.ms/conversations/podcasts/in-my-minds-eye