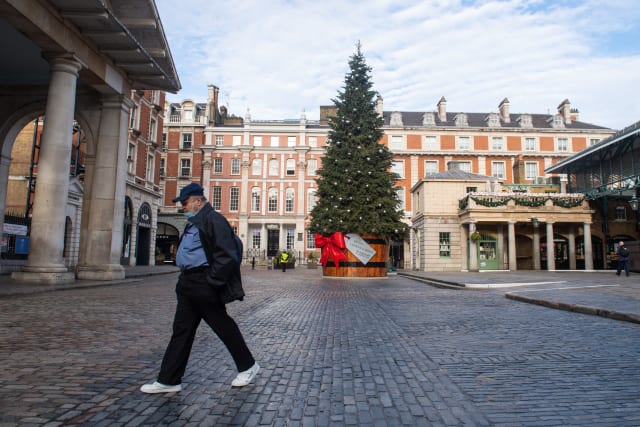 The public will need to make “every effort” to keep coronavirus cases low in December in order to gather at Christmas, a Public Health England (PHE) director has said.

Dr Susan Hopkins, a senior medical adviser to the Government’s Covid-19 response, suggested tougher restrictions could be needed either side of Christmas if curbs are to be eased over the festive period.

“That requires all of us to make every effort over this national restriction period and even in early December to get the cases as low as possible and to reduce the risk of transmission within households and between families.

“A final decision will rest with the Government and we look forward to hearing what those plans are.”

She stressed that “coming into Christmas we need to be very careful about the number of contacts we have to reduce transmission before Christmas and get our cases as low as possible”.

She added: “Hopefully the Government will make the decision that will allow us to have some mixing… and once we have got past the Christmas period, if there has been some release and some socialisation, we will all have to be very responsible and reduce those contacts again.”

It comes as ministers work out what new tiers should replace the previous system once England emerges from the current lockdown on December 2.

She said: “We did send some advice in over the weekend, but we genuinely don’t know what decisions have been made.”

Asked whether household mixing could be allowed if there were other trade-offs, Dame Angela said: “What’s really important is we go into a festive week, when we want to mix with our friends and our family, with the number of infections in the community as low as possible.”

She said the number of people testing positive for coronavirus in the community had risen steeply in September and October but had now slowed down.

Some areas with high levels of infection had already started to see a drop before the lockdown was brought in on November 5, she added.

“What you see is, even before national restrictions were brought in, in the parts of the country where the amount of infections was already very high the progress of the epidemic had already flattened off – that’s the North West and Yorkshire and Humber.

Dame Angela said it would not be a problem for easing England’s lockdown if the R rate remained above one next week, due to the lag in calculating the value.

She told the Downing Street briefing: “The way we estimate R is very dominated by lagging indicators – people who are in hospital or people who have died.

“People who are going in to hospital now are people who got infected weeks ago.”

But she said an increase in people’s activity on the day before England’s latest lockdown came into effect was a “worry to us”.

Asked whether that was a concern when considering measures ahead of Christmas, she said: “We are concerned about how can we have a safe run-up to Christmas so that we can some kind of a good family Christmas.”