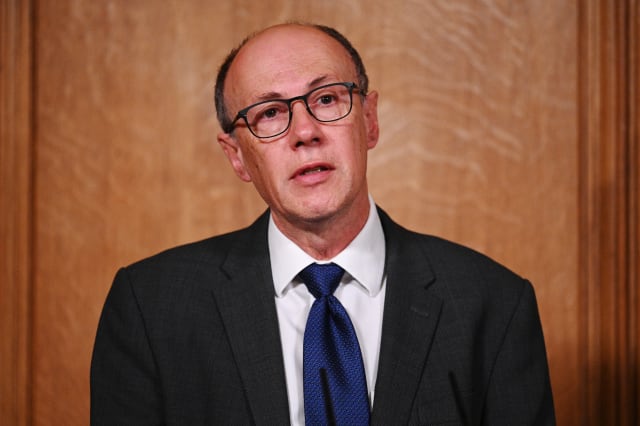 An NHS boss has revealed he is the latest senior figure among those leading the response to the coronavirus pandemic to be forced into self-isolation.

NHS National Medical Director Professor Stephen Powis said he was self-isolating after a member of his household had tested positive for coronavirus.

He told a Downing Street briefing on Wednesday that he was asymptomatic and feeling fine but was going to stay at home and complete his period of self-isolation.

Prof Powis added: “I am on Zoom today, I can’t join you in Downing Street and that’s because a member of my household recently tested positive for Covid, and on the instructions from Test and Trace I am self-isolating.

“I should say I am completely asymptomatic and perfectly fine but I will be staying at home until I have completed my period of isolation.”

His comments came only a couple of hours after Baroness Dido Harding, who leads the NHS Test and Trace programme, revealed she is self-isolating after receiving an alert from the service she runs.

The Tory peer tweeted a screenshot of an app notification on Wednesday morning which carried the message “you need to self-isolate” until 11.59pm on November 26.

The notification informed Lady Harding, interim executive chair of the National Institute for Health Protection, that she has nine days of self-isolation to go.

She wrote above the image: “Nothing like personal experience of your own products …. got this overnight. Feeling well. Many hours of Zoom ahead.”

Someone told to self-isolate by the NHS Covid-19 app must do so for 14 days from the day they were last in contact with a person who tested positive for coronavirus, as it can take up to 14 days for symptoms to appear.

An alert from the app is received once that close contact has booked a test, taken it, received the result which is then inputted or automatically updated in the app.

A Department of Health and Social Care spokesperson said: “Dido Harding is self-isolating after being anonymously notified to do so by the NHS Covid-19 app.

“The NHS Test and Trace system continues to break chains of transmission, with everybody having their part to play in tackling this virus.”

Her husband, Conservative MP John Penrose, had previously been told to self-isolate by the Test and Trace app, part of the operation overseen by his wife, after potentially coming into contact with someone who has coronavirus.

On November 9 the Weston-super-Mare MP tweeted: “It never rains but it pours…. my NHS app has just gone off, telling me to self-isolate, which I’m doing. No symptoms so far *crosses fingers*”

Asked at the time if he had spoken to his wife about it, he told the PA news agency: “We are trying to make sure we are doing it by the book, if I can put it that way.

“Her NHS app has not gone off, so it’s someone I have been in contact with rather than her.”

The news of Lady Harding’s self-isolation comes as Prime Minister Boris Johnson prepares to answer questions at PMQs by videolink on Wednesday as he continues to self-isolate after a meeting with MP Lee Anderson, who tested positive for Covid-19.

Mr Johnson has tested negative for coronavirus but will remain in self-isolation, Downing Street said on Tuesday.

Data released last week revealed that the NHS Test and Trace system is continuing to struggle to reach much more than 60% of the close contacts of people who test positive for coronavirus.

Government figures published on Thursday showed 60.4% of close contacts in England were reached through Test and Trace in the week ending November 4.

It was the fourth week in a row the figure has been around 60%, having dropped from 77.2% during the week ending September 16.

The data came after Lady Harding said Test and Trace on its own is not a “silver bullet” to hold back the spread of coronavirus.

She told a committee of MPs on November 10 that the evidence in the UK and across Europe was that it was just one of a range of interventions needed to tackle the virus.