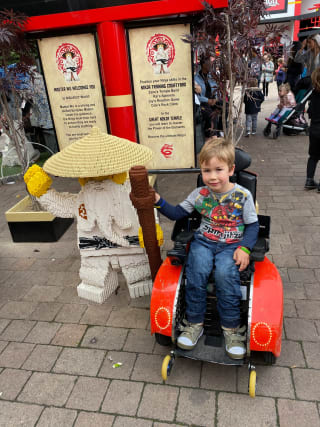 MPs have voiced support for making theme parks more inclusive after a five-year-old boy in a wheelchair was left “humiliated” during a family trip to Legoland.

Sebby Brett, now aged seven, has a condition similar to cerebral palsy, which means he cannot walk even short distances without help.

However, during a trip to the theme park — a treat following four operations in 12 months — he was made to get up out of his wheelchair twice and prove he could take three steps before he was allowed on his favourite ride, Ninjago.

His mother Joanna Brett started a campaign to change how theme parks deal with disabilities, which was the subject of a debate between MPs at Westminster Hall on Tuesday.

Siobhan Baillie, the family’s local MP for Stroud, raised the issue with the parliamentary under-secretary of state for digital, culture, media and sport, Nigel Huddleston.

Ms Baillie told MPs: “This is not just about physical but about mental wellbeing. Such children and families are fighting and challenging all the time, and have to make their voices heard.

“Small acts of kindness or small changes to policy can make all the difference for mental and physical wellbeing.”

Mrs Brett said the debate was the “first steps” towards a more inclusive leisure sector.

She told the PA news agency: “Watching it, I was just filled with pride for Siobhan and pride for what we have achieved.

“I feel quite positive with how it has been left.

Mrs Brett said: “Sebby has enjoyed the attention – what seven-year-old kid wouldn’t? But he’s really excited, partly for him, but he’s old beyond his years and understands we are doing this for other families and kids.”

Sebby’s experience is not uncommon, with MPs told about a child paralysed by a drunk driver refused entry to a ride and a man who had to illustrate he was disabled by removing his false leg and waving at it at staff.

Ms Baillie said: “This was never about one company.

“There are theme parks around the country that should look to their policies and to the law.

“Brave children already battling disabilities should not be made to feel different or be excluded from leisure parks and rides.”

Responding, Mr Huddleston said: “As we make further arrangements to make venues, attractions and other sites, such as sports stadiums, Covid-secure, it is also important to ensure that they are accessible for all.

“The Government’s ambition is to ensure that we all work towards an even more accessible tourism and leisure industry. As I said, the sector itself and the companies involved also realise their responsibilities in this area. Their purpose is to bring joy to people and families. We need to ensure that everybody is included in that.”

A petition started by Mrs Brett has now been signed by more than 26,000 people.

It can be found at: https://www.change.org/p/uk-parliament-fairer-inclusion-for-disabled-children-at-leisure-attractions