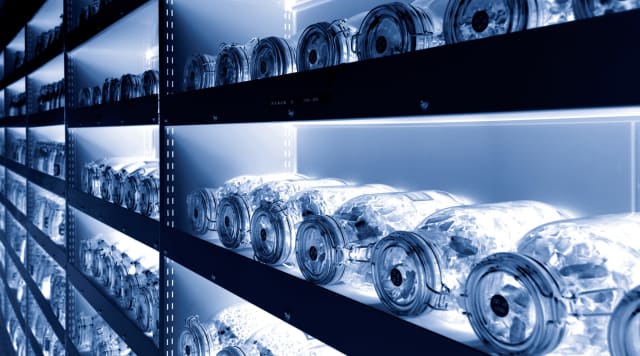 The world’s largest wild plant seed bank has collected and stored 2.4 billion seeds in the 20 years since it opened, conservationists said.

The Royal Botanic Gardens, Kew’s Millennium Seed Bank (MSB), nestled in the grounds of Wakehurst, Sussex, was created at the turn of the millennium as a “Noah’s Ark for plants”.

Scientists have collected and stored the seeds of more than 39,000 species from 190 countries as an insurance policy for rare, threatened and useful plants, experts from Kew said.

They include a wild relative of the carrot which could be tolerant to climate change, a plant extinct in the wild after a landslide wiped it out on remote Pitcairn Island and a rare pea used to restore land lost in Australian bushfires.

As the seed bank marks its 20th anniversary, Kew’s director Richard Deverell said: “As we face the toughest decade ever for our planet with species disappearing at an alarming rate, the work of the Millennium Seed Bank couldn’t be more important – even more so than we could have anticipated 20 years ago.

“The species safeguarded by the partnership since 2000 offer possibility and hope for future generations.

“They could help provide the next major food crop, develop a new cancer drug, or restore degraded habitats destroyed by climate change and deforestation.

“This would not have been possible without the dedication of our partners around the world, who have worked with us in great harmony to seek out the planet’s most precious plants, and to trust us with a collection for safekeeping here in the UK,” he said.

The work with a global network of partners has successfully stored 46,664 species – some 16% of the world’s seed-bearing plants – in collections worldwide.

Wherever possible, every species collected and banked in its native country is duplicated at the seed bank in Sussex so it is safely stored at two locations.

Seeds brought to the MSB are dried, cleaned and banked in an underground vault, which is flood, bomb and radiation proof, at sub-zero temperatures for long-term preservation.

While the “Doomsday” global seed vault in Svalbard, Norway, stores seeds of the world’s crops, the MSB banks wild plants, including relatives of major foods which could be used to develop more resilient crops in the future.

Seeds taken out of the vaults are used for scientific research, as well as conservation, education and horticultural display.

The seeds banked at the site include:

– Daucus carota, a wild relative of the carrot, which has thin wiry roots and is inedible. But it can withstand much harsher growing conditions and could have genetic traits that could be used to create a new edible carrot species able to tolerate drought and a warmer climate.

– Clover glycine (Clycine latrobeana) is a rare pea unique to eastern Australia and listed as vulnerable to extinction. After months of intense bushfires in Cudlee Creek in Adelaide, the MSB sent 250 seeds to Australia for propagation in a seed orchard to help restore the area.

– Abutilon pitcairnense, or yellow fatu flower, became extinct in the wild after a landslide killed the last remaining wild plant on its native island Pitcairn in the Pacific. Seed had already been collected from a cultivated plant and it is stored in the MSB and a propagated specimen is growing at Kew Garden’s Temperate House.

Some seeds cannot be stored as they do not tolerate the drying process, so the Wakehurst team has been working to raise hundreds of endangered monkey puzzle trees from seeds collected alongside Chilean partners from the wild in Chile in 2009.

They have been planted out in a new Chilean woodland at Wakehurst.

The MSB also protects UK native species and earlier this year marked the banking of 13 million seeds from more than 10,000 native trees and shrubs, which scientists said offered possibilities for both research and conservation of UK woodlands.