How does the PlayStation 5 compare to the Xbox Series X? 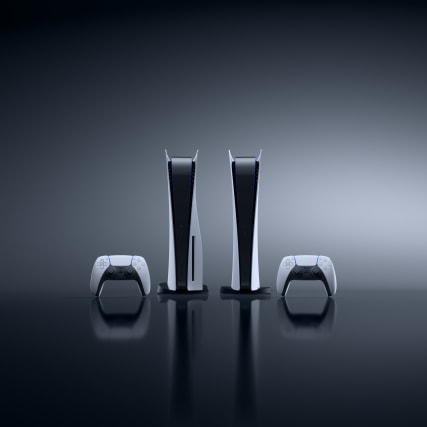 With the launch of the PlayStation 5 in the UK, both major console makers have now released their next-generation devices to gamers.

But how does the new PS5 compare to its rival system, the Xbox Series X?

Standing at around 39cm high when in its upright position and with its stark black and white design, the PS5 is not a subtle console.

At 4.5kg, it is not light either, but the system houses some impressive specs that make it significantly faster and more powerful than previous console generations.

In terms of performance, it has up to 10.4 teraflops of processing power available, and utilises ray-tracing technology to better render light within games.

Combined with the new ultra-high-speed solid state drive, it means games load and run significantly faster than before.

The console is also designed to make them look better because as well as the ray-tracing, the PS5 looks to run games in 4K resolution at up to 120 frames per second (fps).

It can even support 8K resolution where available.

The DualSense controller which comes with the console has received a significant upgrade, including a new haptic feedback vibration system which realistically recreates a much wider range of in-game vibrations than ever before, improving the immersion of gameplay.

In terms of games, Sony has introduced backwards compatibility on the PS5, meaning users are able to play a back catalogue of PS4 games as well as those coming to the PS5.

The PlayStation 5 is priced at £449.99, but is available in a digital-only version, without the Ultra HD Blu-ray disc drive which comes on the main console, for £349.99.

Microsoft’s new flagship gaming system is also priced at £449, but comes in a more compact package.

Inside too it is similarly powerful – using what Microsoft calls Velocity Architecture, the Series X offers 12 teraflops of processing power.

The Series X will run games in 4K resolution at 60fps, with further support for 120fps too.

The new Xbox also has its own way to quickly load games, through a feature called Quick Resume which allows players to jump between and back into games in seconds.

And in terms of an expansive games catalogue, Xbox owners can choose to join Game Pass, the console’s library of more than 100 games which can be streamed instantly.

Much like Sony, Xbox also has a digital-only version of its new console, the Series S, which has many of the same features of the Series X, but is considerably cheaper at £249.