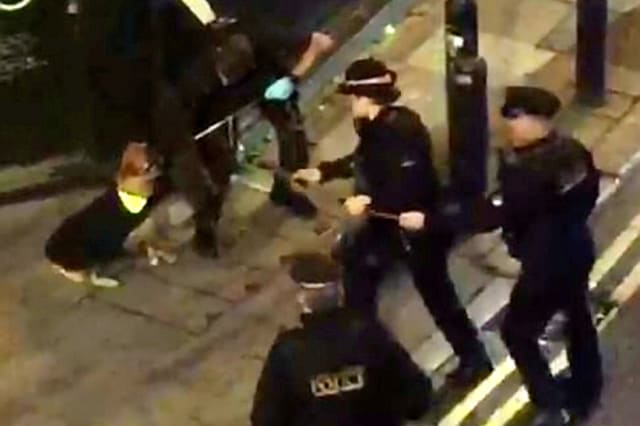 This is the moment half a dozen police officers surround a homeless dog before attempting to TASER it.

Footage shows several police officers surrounding the stray dog in an attempt to capture it with a wire loop pole.

Onlookers say there were a couple of officers initially at the scene before "calling for backup" and another three police vans arriving along Brick Lane, East London.

But after several minutes of failed attempts, one male police officer decides to draw his taser in a bid to capture the squirming pooch.

The dog can be heard whining and backing away from the armed officer before the taser is fired -- something which can be fatal for dogs.

The petrified animal can be seen running off along the street and successfully escapes the officers.

An eyewitness said: "It's crazy how many police cars and vans were there.

"The dog had been outside most of the afternoon and wasn't causing any bother.

"When they went to taser the dog it just seemed like everything notched up a gear.

"It just seems a bit over the top.

"I don't even know if that's legal to do that."