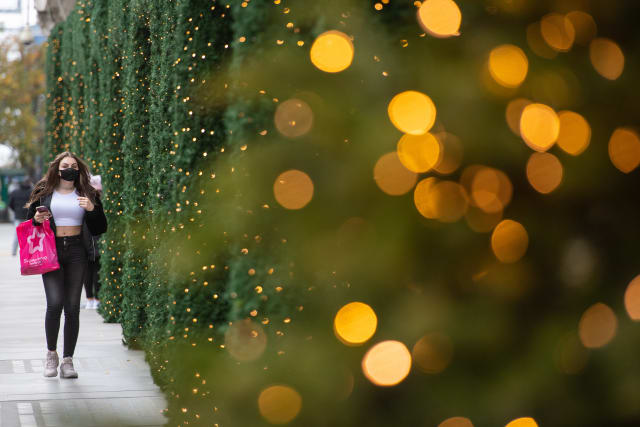 Each day of greater freedom around Christmas could require an extra five days of coronavirus restrictions, scientists have said.

It has been reported households could be allowed to mix indoors for a five-day period starting on Christmas Eve – meaning a potential 25-day period of tighter measures into January if such advice was implemented.

The public will need to make “every effort” to keep coronavirus cases low in December in order to gather during the festive season, a Public Health England (PHE) director said.

Dr Susan Hopkins, a senior medical adviser to the Government’s Covid-19 response, suggested tougher restrictions could be needed either side of Christmas if curbs are to be eased for a time.

“That requires all of us to make every effort over this national restriction period and even in early December to get the cases as low as possible and to reduce the risk of transmission within households and between families.

“A final decision will rest with the Government and we look forward to hearing what those plans are.”

At the briefing, she said scientists had suggested that one day of greater freedom required two days of restrictions, but PHE later said Dr Hopkins “misspoke” and that the Sage (Scientific Advisory Group for Emergencies) advice had referred to modelling indicating that for every one day of relaxation, five days of tighter restrictions could be needed.

Dr Hopkins told the briefing: “So coming into Christmas, we need to be very careful about the number of contacts we have to reduce transmission before Christmas and get our cases as low as possible.

“Hopefully the Government will make the decision that will allow us to have some mixing… and once we have got past the Christmas period, if there has been some release and some socialisation, we will all have to be very responsible and reduce those contacts again.”

It comes as ministers work out what new tiers should replace the previous system once England emerges from the current lockdown on December 2.

She said: “We did send some advice in over the weekend, but we genuinely don’t know what decisions have been made.”

Asked whether household mixing could be allowed if there were other trade-offs, Dame Angela said: “What’s really important is we go into a festive week, when we want to mix with our friends and our family, with the number of infections in the community as low as possible.”

She said the number of people testing positive for coronavirus in the community had risen steeply in September and October but had now slowed down.

Some areas with high levels of infection had already started to see a drop before the lockdown was brought in on November 5, she added.

Dame Angela said it would not be a problem for easing England’s lockdown if the R rate remained above one next week, due to the lag in calculating the value.

But she said an increase in people’s activity on the day before England’s latest lockdown came into effect was a “worry to us”.

Asked whether that was a concern when considering measures ahead of Christmas, she said: “We are concerned about how can we have a safe run-up to Christmas so that we can have some kind of a good family Christmas.”

Dame Angela also said that while admissions to hospital during the March/April lockdown were halving every three weeks, she did not think that would be achieved this time round.

– Prime Minister Boris Johnson answered questions at PMQs by video link on Wednesday as he continues to self-isolate following a meeting with MP Lee Anderson, who tested positive for Covid-19.

– NHS Test and Trace chief Baroness Harding is self-isolating after being told to do so by the app she oversees. NHS medical director Professor Stephen Powis is also isolating after a family member tested positive.

– A study from the University of Warwick of mechanical ventilation beds in England shows 30% of hospitals reached 100% capacity at some point during the first wave of the pandemic.

– Separate figures published by the UK’s statistics agencies for deaths where Covid-19 was mentioned on the death certificate, together with additional data on deaths in recent days, show there have been 68,000 deaths involving Covid-19 in the UK.

– A further 529 people had died within 28 days of testing positive for Covid-19 as of Wednesday, the Government said, bringing the UK total to 53,274.

Mr Johnson wants to ease coronavirus rules to allow families to be reunited over Christmas and his Government has been working with counterparts in Scotland, Wales and Northern Ireland to agree to a UK-wide approach.

But, following reports about allowing households to mix indoors for a five-day period from Christmas Eve, Business Secretary Alok Sharma said it was not yet clear whether that would be possible.

“I just think it’s too early to be reaching any conclusions on that. What none of us knows right now is what the infection rate is going to be in different parts of the country.”

With Christmas Eve falling on a Thursday and a bank holiday on Monday December 28, it is thought that ministers are looking at that five-day period to allow some sort of indoor gatherings.

The Prime Minister’s official spokesman said: “We are looking at ways to ensure that people can spend time with close family over Christmas at the end of what has been an incredibly difficult year.”

It said the previous system was “inconsistent” and did not contain the spread of the virus, echoing the Scientific Pandemic Influenza Group on Modelling (SPI-M), which has said there was a “clear effect” on infection rates from strict Tier 3 interventions but “much less from Tiers 1 and 2”.

The SPI-M believe infections will rise at the same rate as before if the same three-tier system is brought back in on December 2.