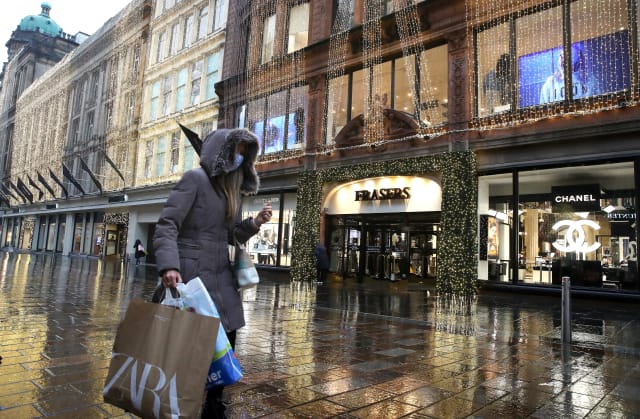 Sales for the retail sector in Scotland have slipped to the weakest performance since lockdown ended in June, according to experts.

Figures in the latest Scottish Retail Consortium (SRC)-KPMG Scottish Retail Sales Monitor indicate total sales were down 8.5% last month compared to October 2019 when they had decreased by just 0.4%.

Total food sales increased 4.4% in October 2020 (compared to just 2.6% in the same month last year) which was the highest growth since March when figures were said to have been inflated by stockpiling – while total non-food sales also decreased by 19.3%.

“Accelerated growth in food sales provides some evidence that a tightening of restrictions and growing fears of a return to lockdown are encouraging stockpiling, but it isn’t enough to halt an overall decline.

“With non-food sales down by more than 19 percent and total year-on-year sales down almost seven percent, retailers are facing a daily fight for survival.

“Shifting consumer behaviour, driven by Brexit and Covid-19 uncertainty is having an unprecedented impact on Scotland’s retail industry.

“We’re just a week away from Black Friday and in the middle of the so-called ‘Golden Quarter’, when the sector typically witnesses its biggest gains.

“This winter, to simply survive, retailers will have to double down on innovative strategies, pivot towards profitable online revenue growth and work even harder to tempt some shoppers back to physical retail spaces.”

Early festive shopping, particularly for Christmas decorations and gifting, was recorded but Halloween celebrations failed to muster much among the figures.

Store-based sales in other non-food categories were also down by a fifth on the same period last year with beauty and fashion faring especially poorly.

But as of Friday non-essential shops will have to close in 11 council areas of the country which will remain under Level 4 restrictions for three weeks until December 11.

David Lonsdale, SRC director, said: “The recent gradual improvement in retail sales went into reverse in October, slipping to the weakest performance since the ending of the lockdown in June, as greater Covid restrictions and economic uncertainty exerted a vice-like grip.

“Retail sales in Scotland have still to emerge from the pandemic-induced funk after eight months, deeply concerning at what is for many stores the start of the all-important festive period.

“We are now in the all-important festive trading period, when some retailers traditionally make the majority of their annual revenues or at least enough to tide them over the lean winter period.

“Businesses which were perfectly healthy at the start of the year are now struggling with circumstances beyond their control, and the fight for survival couldn’t be more intense for some.

“Further forced store closures due to any local lockdowns during the coming weeks could be the final straw for some retailers.”