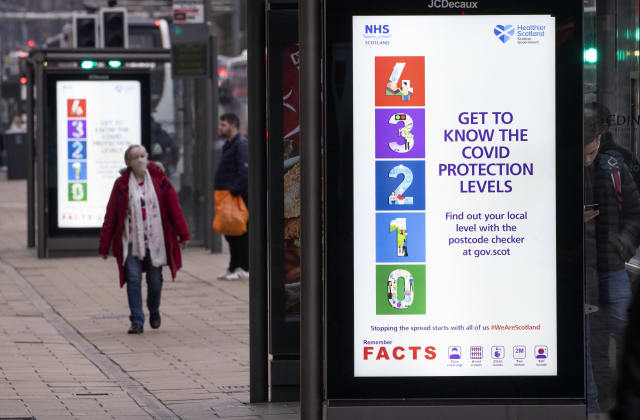 A total of 11 council areas are to be placed into Scotland’s highest tier of coronavirus restrictions later this week, Nicola Sturgeon has said.

Scotland’s First Minister announced the decision to MSPs in the Scottish Parliament on Tuesday at the weekly review of the Scottish Government’s coronavirus measures.

She said the “stubbornly and worryingly high” infection rates in these areas mean they will move from Level 3 into Level 4 of the five-tier system.

Under the Level 4 restrictions, non-essential shops will be forced to shut, with bars, restaurants, gyms, hairdressers and visitor attractions also prohibited from opening – although schools will stay open.

Non-essential travel into or out of the areas will be barred- a rule which will become law from Friday and also apply to Level 3.

Ms Sturgeon said East Lothian and Midlothian will move from Level 3 to Level 2 after “marked decline” in the prevalence of the virus.

The First Minister told MSPs: “I know people are frustrated that other restrictions have remained in place longer than planned but Level 4 is intended to be short and sharp.

“And in this situation, it is specifically intended to have an impact in advance of Christmas and the most challenging winter period.

“Lifting the Level 4 restrictions then – as we will do – also means that they will not be in place for most of the Hanukkah period – so again, while celebrations may be different, there will be a greater degree of freedom.”

She added: “We will assess nearer the time the level that will apply in each area when the Level 4 restrictions end on December 11.”

The First Minister said she hopes affected areas will be able to move to Level 2 “much more quickly than would otherwise be the case”.