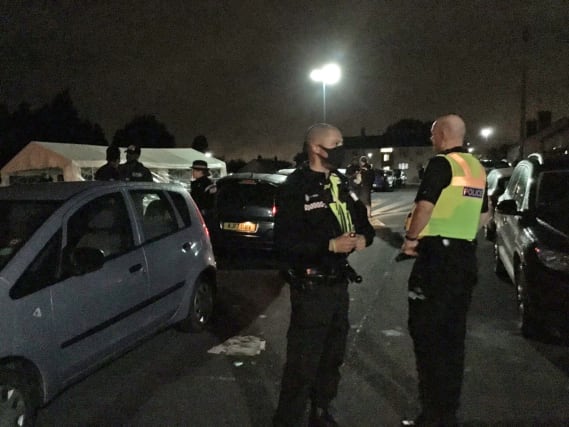 Police forces in England and Wales can return to handing out £10,000 “super fines” to those who break lockdown rules on gatherings – less than a week after they were told to stop using them.

The levies were suspended last Friday when police chiefs flagged the potential disparity in punishment between those who accept the fixed penalty notice (FPN) and those who challenged them in court.

The National Police Chiefs Council (NPCC) pointed out to the Home Office that when FPN’s go before magistrates they are means-tested, meaning the recipient’s ability to pay is taken into account.

It means those who fight the case can potentially pay significantly less than those who accept the FPN and agree to hand over the full amount within 28 days.

The fact the fines had been halted only emerged on Tuesday when Labour’s West Midlands police and crime commissioner David Jamieson revealed he had written to Policing Minister Kit Malthouse seeking “urgent” clarification on the issue.

He claimed the Government had failed to provide the police with “workable Covid legislation”.

The NPCC said on Tuesday it was “working urgently” with the Government to solve the issue.

Within two hours of the NPCC’s statement being issued, the Home Office said it anticipated all forces would start handing out super-fines again by Wednesday.

The Home Office said in a statement it was “working with forces to ensure people are fully aware of their options when faced with a fixed penalty notice”.

“If someone chooses not to pay their fixed penalty notice, the matter may be considered by a court and the individual could be subject to a criminal conviction,” a spokeswoman added.

On Tuesday evening, the NPCC said it had resolved the issue by agreeing that anyone issued with an FPN will be made fully aware of the right to fight it in court.

The NPCC said in a statement: “People found to be in breach of the regulations relating to gatherings of over 30 people will be made fully aware of their options when faced with a £10k FPN, to ensure fairness.

“The option of (a court) summons will remain available to officers, as it always has been, should the unique circumstances of a case mean that this is the most appropriate course of action.

“However, the vast majority of cases can be dealt with by way of FPN.”

West Midlands’ chief constable David Thompson, who is a vice chair of the NPCC and its national finance lead, said it was the £10,000 amount that had sparked concern among police chiefs.

He added that the force had employed a “very tight policy” around issuing the super-fines – issuing 13 to date – “because we have been very conscious a £10,000 levied fine is substantial”.

Mr Jamieson previously asked what the situation was for those fined who had already paid, asking “if they will be getting a rebate” or “go to court retrospectively”, and those who had not yet paid.

The PA news agency has approached the Home Office for comment on the options available to those who have already paid the fine.