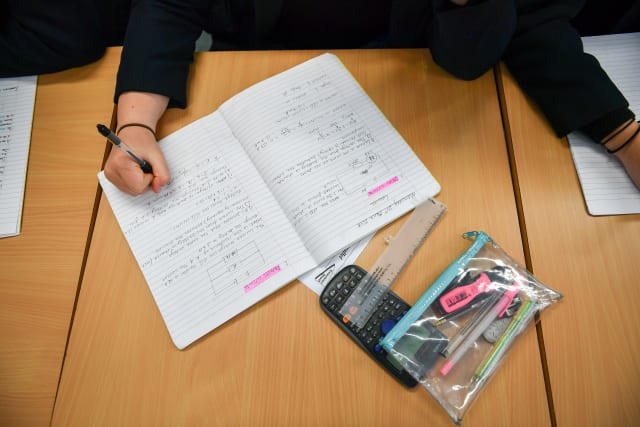 Nearly two in three secondary schools in England had at least one pupil self-isolating at home due to potential contact with coronavirus last week, Government figures show.

Pupil attendance in secondary schools has dropped from 87% a week earlier to 83% on November 12, according to the Department for Education (DfE) statistics.

Overall, approximately 6% to 8% of state school pupils did not attend school for coronavirus-related reasons on Thursday last week, the analysis shows.

One head teachers’ union called on the Government to allow schools to move to a rota system, adding that the current situation is “unsustainable”.

Around 29% of schools reported they had one or more pupils self-isolating who had been asked to do so due to potential contact with a Covid-19 case at school, up from 16% the week before.

Overall, pupil attendance dropped from 89% a week earlier to 86% on November 12.

Approximately 83% of secondary school pupils were in classes last week, while attendance in primary schools dropped from 92% to 90%.

The figures come after fears that pupils’ attendance in schools could drop amid the four-week lockdown in England.

Schools, colleges and nurseries can remain open under the restrictions.

On Tuesday, Hull’s director of public health Julia Weldon said more than half of schools in the city have seen closures in some year groups due to coronavirus.

Geoff Barton, general secretary of the Association of School and College Leaders (ASCL), said: “It is clear that the improvement we saw following the half-term holiday was temporary and that the situation has worsened again very quickly.

“Disruption is widespread and is happening in an ad hoc manner because of the unpredictability of outbreaks. This makes it very difficult for schools to be able to plan and deliver lessons and catch-up support. This is exacerbated if there are also members of staff having to self-isolate.”

He added: “We understand the Government’s desire to keep all pupils in school full-time. But when nearly two-thirds of secondaries are sending home pupils, we have a chaotic rota system by default.

“Schools need to be given more latitude to move to a planned rota system if they feel that this would be less disruptive, more manageable, and in the best interests of their pupils.

“It would give them the ability to deliver direct and remote learning around smaller groups rotating between school and home in a planned manner.

“The Government has to recognise reality. The current situation is unsustainable.”

Last week, a document released by the Scientific Advisory Group for Emergencies (Sage) said children aged 12-16 played a “significantly higher role” in introducing infection into households in the period after schools reopened their doors to all students in September.

Paul Whiteman, general secretary of school leaders’ union NAHT, said: “We remain particularly concerned about the spread of the virus amongst older pupils and in secondary schools, as the prevalence of the virus has risen significantly in secondary since schools reopened fully.

“There are worrying signs that older pupils could be playing a role in spreading the virus amongst family members, and this must be watched very closely.”

Between 18% and 20% of schools said they had 30 or more pupils self-isolating due to potential contact with a case of Covid-19 inside the school, up from 8% to 9% on November 5.

About 0.3% of pupils were absent as their school was closed for coronavirus-related reasons, 0.3% were off as they suspected they had Covid-19 and 0.2% were off after testing positive.

A DfE spokeswoman said: “Over 99% of schools have been open every week since term began and millions of pupils are continuing to benefit from being in school.

“The chief medical officer remains of the view that schools should remain open, and has highlighted the damage caused by not being in education to children’s learning, development and mental health.”