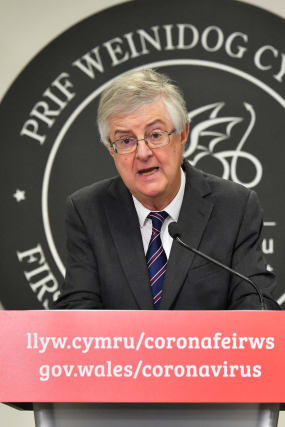 Devolution in Wales has been able to “thrive” under a Welsh Labour government, First Minister Mark Drakeford has said.

His claim followed comments made by Boris Johnson after he told Conservative MPs that devolution had been “Tony Blair’s biggest mistake”.

At Tuesday’s Questions to the First Minister session at the Senedd, Plaid Cymru leader Adam Price told Mr Drakeford that “to reverse the Prime Minister’s logic, it is because Westminster has proven so disastrous to Wales that this Senedd exists”.

“Devolution thrives when there is a Labour government to support it, and devolution comes under the sorts of pressures that it is now under when we have a Conservative government, and where you scratch the surface of the Conservative Party and all its old hostility to devolution rises back to the surface.

“That’s what happened yesterday, when the Prime Minister thought that he could show off in front of a few Conservative MPs from the north of England.”

But the leader of the Welsh Conservatives in the Welsh Parliament, Paul Davies, told the Welsh Labour’s reign in government had proven “a disaster”.

Mr Davies said: “Devolution hasn’t been a disaster. Twenty-plus years of Welsh Labour-led governments have been a disaster for devolution in Wales. The people of Wales deserve better.

“Instead of doing their job in ensuring our economy and health and education services are the best they can be, the Welsh Government has been obsessed with arguing about more powers.”