Majority of coronavirus fines unpaid in some parts of England, data suggests 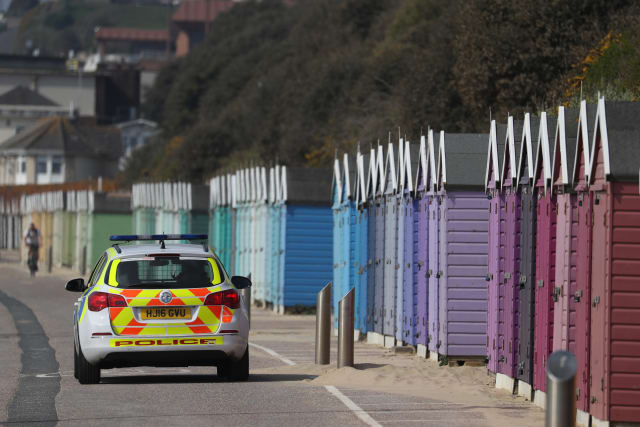 More than three in five coronavirus fines have gone unpaid in some parts of England, figures suggest.

According to data obtained by the PA news agency under freedom of information legislation, nine forces saw 60% or more of the penalties go unpaid within 28 days between March 27 and September 21.

It comes as police forces were told to resume handing out £10,000 so-called super-fines less than a week after a decision to suspend them.

The highest proportion of unpaid fines was in the Cleveland force area, where 72% of fines for the period, 215 out of 298, went unpaid.

In Northumbria the proportion was 68%, with 188 out of 278 fines not paid, while in West Yorkshire 66% of fines, 497 out of 756, went unpaid, according to data from the criminal records office ACRO which administers the fines.

It was previously disclosed that about half of fines nationally went unpaid in the 28-day period, although chairman of the National Police Chiefs’ Council (NPCC) Martin Hewitt said this proportion is similar to other fixed-penalty notices.

The total number of fines issued in England and Wales between March 27 and September 21 was 18,912.

People who receive a coronavirus fine can appeal in the first instance to the police force that handed out the penalty, to try to get it withdrawn.

This was also true for British Transport Police in England, which withdrew 40% (131) of fines.

The figures provide a snapshot of data gathered by forces as of September 21, and as a result of the way the figures are recorded, may contain some overlap between the number of unpaid fines, those rescinded and formally contested.

Lawyer Raj Chada, head of the criminal defence department at Hodge Jones & Allen, described Covid regulations as a “mess” and said criminal law needed to be clear and consistent otherwise it becomes “arbitrary and unfair”.

Kirsty Brimelow QC, a human rights barrister at Doughty Street Chambers, told PA it was “predictable” people would stop paying fines, with some not being able to afford to pay them, or not feeling they did break any laws, while others “may just be resentful that those in power acted as if the laws did not apply to them”.

Calling for panels to be set up to review fines, she said: “Currently, it is a lottery whether you are fined and whether it will be rescinded.

“And it is questionable as to how effective issuing fines is to preventing the spread of the virus.

“Rather they are adding stress and hardship to people who already are suffering.”

The ACRO data also showed that in total, 293 fines issued between March 27 and September 21 in England and Wales were formally being contested.

Madeleine Stone, legal and policy officer at campaign group Big Brother Watch, said the figures “make it plain that there are serious failings in the way police have issued fines during the pandemic” and described unpaid lockdown fines as a “prosecution crisis waiting to happen”, adding: “The laws governing lockdowns are constantly changing, complex and poorly drafted.”

On Tuesday, it emerged forces were last week told to stop handing out £10,000 super-fines and instead issue a court summons amid concerns there was potential disparity in the process for those asked to pay up within 28 days and others who challenge the penalty notices in court.

Later that day, the NPCC said it had resolved the issue by agreeing that anyone issued with an FPN would be made fully aware of the right to fight it in court.

Owen Weatherill, the officer leading the policing response to the pandemic, told MPs last month that it had taken forces time to understand the changing lockdown rules, and said that he had pushed the Government to keep messaging for the public simple.

A spokesman for the NPCC said: “We have enforced the law as set by the Government and Parliament. It is only right that fines are then processed in accordance with the law and we therefore encourage people not intending to contest a fine to pay it.

“If any individuals are concerned about why they have received a fine, they can raise it with the force which issued the FPN within the 28-day payment period.

“Officers will have recorded their justifications for issuing an FPN, along with providing evidence to support any breaches of the regulations.

“Once a fine is contested or unpaid the case will proceed to court. Police forces review all of these cases to further ensure only those cases that meet the evidential and public interest test are heard in court.”