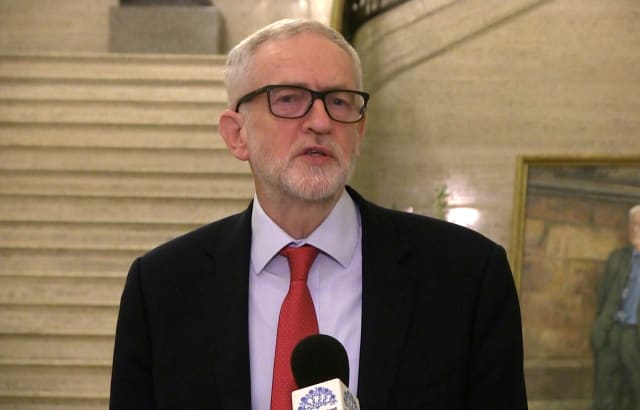 Jeremy Corbyn could soon learn how his suspension from Labour will be resolved as the party’s governing body met to consider disciplinary action against the former leader.

Ahead of the disputes panel’s meeting on Tuesday, the MP sought to publicly clarify the response he gave to the Equality and Human Rights Commission’s damning report into anti-Semitism in the party during his leadership.

Mr Corbyn acknowledged that concerns around anti-Semitism in Labour were not “exaggerated”, weeks after he was suspended for saying the problem was “dramatically overstated”.

Labour declined to comment, but the PA news agency understands the disputes panel of Labour’s ruling National Executive Committee (NEC) was to discuss his case on Tuesday.

The NEC could take a range of responses, from no further action, to a time-limited suspension, or a permanent expulsion. Each one would be politically fraught.

Sir Keir Starmer has vowed to give a tough response to restore the Jewish community’s faith in the party, but some MPs and activists fear a purge of the Labour left under his leadership.

Mr Corbyn’s suspension came after the human rights watchdog ruled that Labour broke equality law during his leadership over its handling of complaints of anti-Semitism.

Party general secretary David Evans did not suspend Mr Corbyn over the report, but his response to it.

Mr Corbyn, currently an independent MP having led Labour until April, had said that while “one anti-Semite is one too many” the “scale of the problem was also dramatically overstated for political reasons by our opponents inside and outside the party, as well as by much of the media”.

His statement was at odds with Sir Keir who said that anyone who suggested anti-Semitism was “all exaggerated, or a factional attack” should be “nowhere near the Labour Party”.

On Tuesday morning, Mr Corbyn revealed that he had given a statement to Labour in an attempt to “clear up any confusion” over his initial response and a broadcast interview about the report.

“We must never tolerate anti-Semitism or belittle concerns about it,” he said in the statement to the party.

“And that was not my intention in anything I said this week. I regret the pain this issue has caused the Jewish community and would wish to do nothing that would exacerbate or prolong it.

“To be clear, concerns about anti-Semitism are neither ‘exaggerated’ nor ‘overstated’. The point I wished to make was that the vast majority of Labour Party members were and remain committed anti-racists deeply opposed to anti-Semitism.”

Labour declined to comment on whether Mr Corbyn’s case was being heard on Tuesday, with a spokeswoman saying the party could not give “a running commentary on an individual case”.

It was not clear how swiftly the panel would make its decision.

Marie van der Zyl, president of the Board of Deputies of British Jews, called on Labour to reject Mr Corbyn’s “pathetic non-apology”.

She said: “If the party wants to show it is serious about tackling anti-Jewish racism, it will consign this statement, just like the culture which led to the EHRC’s damning findings, to the dustbin of history.

“To do otherwise would be a failure of leadership which would risk the party slipping backwards.”

“This is a desperate attempt to have his suspension lifted and reveals that he still believes that suspensions are something that happen on the whim of the leader as it did during his tenure, and not as a result of any due process.”