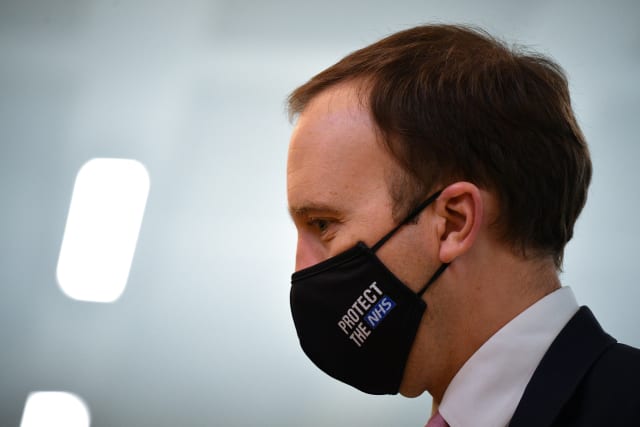 Matt Hancock has committed to asses whether Covid-19 restrictions can be based on smaller geographical areas once lockdown ends.

The Health Secretary told MPs it is “too early” to say what measures the Government will implement following the four-week shutdown in England.

But he pledged to look at a proposal to allocate tiers by districts rather than by county when asked by Conservative MP Kevin Hollinrake (Thirsk and Malton).

Speaking in the Commons, Mr Hollinrake said the economic effects of the lockdown on the hospitality sector particularly are “very severe”.

He added the infection rate in large constituencies “can vary significantly across different districts” before asking Mr Hancock: “When he moves… back to a tiered system on December 3, would he look at allocating these by districts rather than by county to keep the economy as open as possible?”

Mr Hancock replied: “Throughout the process of the tiered system, we’ve always looked at a level of granular detail whether that be district council-level or indeed at ward-level in some cases to make sure that we have the appropriate measures in the appropriate places.

“Whilst it’s too early to say exactly how we’ll proceed from December 3, that’s a commitment that I can make to (him).

For Labour, shadow health secretary Jonathan Ashworth earlier said: “Yesterday at his press conference we heard that Tier 1 has had very little effect and that the tiers must be strengthened.

“So can he confirm that it is the Government’s intention to impose a tougher set of restrictions on Tier 1 areas post this lockdown?”

Mr Hancock replied: “It is too early to do the analysis that (Mr Ashworth) requests, but of course we remain vigilant.”

Mr Ashworth continued: “The ministers have promised us to give the NHS whatever it takes. Can he guarantee that the spending review will deliver the resources and beds and capacity to bring waiting lists down?”

Mr Hancock replied: “The good news is that we are managing to continue to drive through the backlog that understandably built up in the first peak and so I think that (Mr Ashworth), instead of attacking the NHS, should be backing the NHS and thanking them for the incredible hard work that the NHS are doing right now and will be doing over this winter.”

On the search for a Covid-19 vaccine, Mr Hancock told MPs: “Yesterday the House will know that we secured five million doses of the Moderna vaccine.

“So we’ve now secured access to 355 million vaccine doses through agreements with seven separate vaccine developers and we’ve secured this for the whole of the UK.”

Health minister Jo Churchill added “every sinew is being strained” to deliver a safe vaccine as swiftly as possible.

Labour former minister Angela Eagle said: “Can (Ms Churchill) give any view at this stage, given the logistical efforts that are going in, how long it will take in her opinion for us to be able to safely vaccinate everyone in the country?”

Ms Churchill responded: “There is a process. We have to know it’s safe through the regulatory framework, we then have to know as it arrives from the manufacturers we can distribute it at pace.

“We are aiming to do that and every sinew is being strained to make sure we can deliver as swiftly as possible. The entire population wants to get on with living a normal, or a more normal, life.”