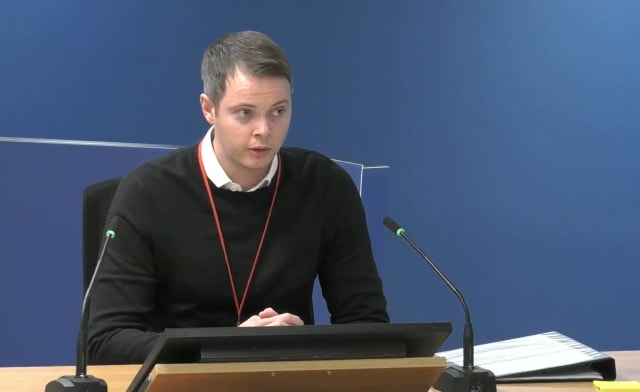 A national building control body issued a certificate for flammable insulation used on Grenfell Tower by copy and pasting the manufacturer’s “intentional, deliberate and dishonest” description of the product as being safe for high-rises, the inquiry into the fire has heard.

The Local Authority Building Control (LABC) lifted word-for-word a description of Celotex’s Rs5000 insulation which had been suggested by the firm’s assistant product manager Jonathan Roper in June 2014, the hearing was told on Tuesday.

The “untrue and misleading” certificate issued several weeks later was subsequently provided to external wall fitters Harley Facades and relied upon by building control officer John Hoban during the revamp of Grenfell Tower.

The inquiry has heard Celotex employees earlier that year manipulated a key fire safety test to secure a pass for its combustible Rs5000 product for use on high-rise buildings, including by falsifying technical drawings and failing to declare a fire-resisting material had been included in the test.

Referencing the LABC certificate issued around August 2014, inquiry lawyer Richard Millett QC told Mr Roper: “The quote is taken exactly from the wording you had suggested … it even includes the spaces before and after the bracket.

“Can you account for how it comes about that the LABC have simply lifted your text from your email and put it into a formal document?”

He agreed with Mr Millett that the certificate “was as untrue and misleading as the language” he had suggested in his email and that the firm “had intended that to be the case as a way of avoiding being challenged by building control officers down the track”.

Mr Roper agreed the misrepresentation of the fire test data was an “intentional, deliberate and dishonest” act.

Mr Millett said: “It was of course untrue that Rs5000 could be used with a variety of cladding systems.

“You were giving wording to the LABC that you accepted yesterday was untrue and misleading – namely that because the system had passed an 8414 test, it could therefore be used in buildings generally over 18 metres.

“Over and above putting that message in sales literature you were now wanting the LABC to put it into its own certificate.

“So that instead of it simply now being in what might be dismissed as just sales talk, this was actually going to go into an official-looking document which would have profound influence on the way building control officers might regard the use of Rs5000 above 18 metres – is that right?”

The inquiry also heard on Tuesday that Celotex manipulated technical drawings of the cladding system tested, recording ventilation gaps of 10mm had been used between panels, while in fact they had been “very minimal” and smaller than that.

Celotex, part of the French multinational Saint-Gobain group, has said in a statement to the inquiry: “In the course of investigations carried out by Celotex after the Grenfell Tower fire, certain issues emerged concerning the testing, certification and marketing of Celotex’s products … These matters involved unacceptable conduct on the part of a number of employees.

“They should not have happened and Celotex has taken concerted steps to ensure that no such issues reoccur.”