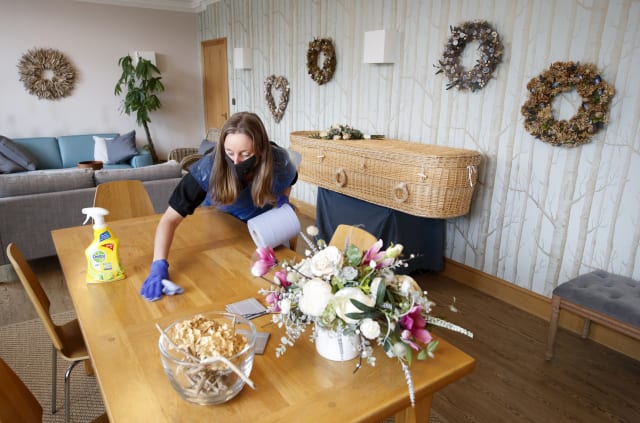 A funeral director who is preparing for a second wave of Covid-related deaths has used the experiences of professionals in the industry to create a guide to help support bereaved people.

Sarah Jones, funeral director at Full Circle Funerals, said she and her colleagues had been on a “steep learning curve” since March but had overcome the difficulties to successfully adapt how funeral services can be delivered safely while meeting the needs of the bereaved.

She said many of those in the funeral industry had stepped up to become a support network for people who might otherwise be isolated due to coronavirus restrictions and wanted to share their learning to help others.

Ms Jones said the West Yorkshire-based company was not overwhelmed in the first wave of coronavirus but is “confident” in the systems and procedures she put in place during that time.

She said: “We have had people in our care who have died with Covid, although we never saw anything here like I know people did in other parts of the country, and we are prepared for a second wave.”

She added: “We worked hard and we’re confident we’ve got systems and processes that keep people as safe as possible but also mean there is plenty of opportunity to create meaning and still have important rituals in and around funerals.

“We’re just trying to work hard to meet those restrictions with warmth and gentleness.”

Ms Jones said she recently spoke to more than 60 professionals who support bereaved people to ask them to share their experiences in order to create an open-access guide to help those in the industry to deliver the best possible care over the coming months.

She said: “Almost every single person described how they all stepped up, they all adapted, recognised there was a bigger need and a broader need and they’d all tried to step up into that void to compensate for the lack of the usual infrastructure and support that people have.”

She added: “It’s about recognising they might have some really basic needs, they might be self-isolating and not have any food, and being more proactive with checking-in, make that slightly more human connection and give more practical support that normally people would have got from friends and family.

“People are becoming bereaved in a different context and they are a bit more isolated so, as a result, we find ourselves offering a bit more non-funeral-related support and being more holistic in our approach because we recognise that a lot of people have lost their network, their community and they’re seeing less people, so we’re one of the few people they might be seeing.”

Ms Jones said the biggest challenges faced by the bereaved are the restrictions on numbers and the difficulties in understanding the rules – particularly when they change while the funeral is being arranged.

Other changes include family pall-bearers not being allowed to carry the coffin, mandatory face masks, seating arranged for social distancing, shorter services to allow for cleaning, no singing or touching of the coffin and families being unable to physically console one another.

She said there had also been some “really unexpected positives”, such as services being smaller and more intimate – allowing people to feel they can express their grief – and people being more willing to read tributes without being concerned about public speaking.

She said technology had been “brilliant” during the pandemic – enabling conversations that would otherwise not have happened and allowing families to live-stream funeral services.

Ms Jones said: “It’s been hard but everyone’s adapted really well and I think a lot of people feel like they have managed to create something which was helpful and which the person who has died would have been happy with.”